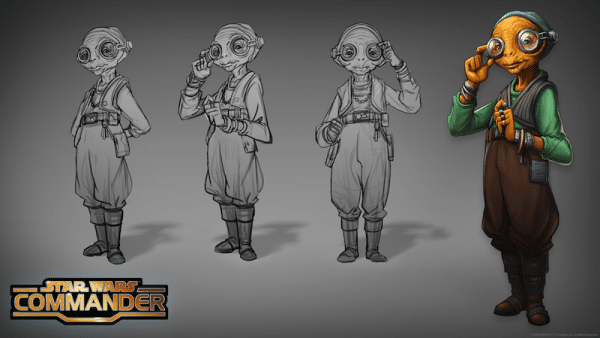 The popular mobile strategy game Star Wars: Commander has a new series of objectives coming for a limited time only. It adds Maz Kanata from The Force Awakens to the game, according to an announcement from Disney this past week. All players at headquarters level four and up will be able to do the new tasks in the game.

“Today we are excited to unveil new objectives for Star Wars: Commander that feature the Force™-sensitive smuggler from Star Wars: The Force Awakens, Maz Kanata. During these special time-limited objectives, Maz Kanata will reach out to players through the game’s InfoNet newspaper and the Planetary View, requesting help in the completion of specific tasks. All players at headquarters level four and up will be able to participate in these new activities with each planet in the galaxy featuring different sets of objectives.”

Maz Kanata will appear through the InfoNet newspaper and also the Planetary View and will ask you for your help. Then, if you choose to accept the missions, you’ll find that each planet in the galaxy has a different set of objectives for you to do. This keeps the game fresh, something much needed in a mobile game (or any game, really).

So what kind of goodies do you get for doing these tasks for Maz? Well, he rewards you with “Maz’s Curio Boxes”, which are basically Supply Crates. They have new infiltrator units called Trandoshan mercenaries and they disable enemy shields in combat. This will definitely help you when taking over enemy bases.

But if you want to check out this new content in the game, you better do it now. It’s only in the game for a limited time