You may disagree with the location of some of the planets, but I think its pretty spot on. I have done a lot of research and looked up all the planets (description, history, rims, location etc.)

White planets on map is confirmed and yellow is unconfirmed. 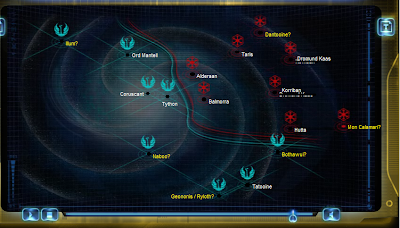 Illum: Ilum was the ice planet home to many of the Adegan crystals used in the construction of Jedi lightsabers. The caverns containing the crystals were long ago turned into a Jedi temple. Unlike the crystals of other planets, the crystals of Ilum could only produce green and blue lightsaber crystals.

Naboo: Naboo was a planet that was the sector capital of the Chommell Sector near the Outer Rim territories. It was a largely unspoilt world with large plains and forests and oceans. It was mostly known as the homeworld of notable historical figures who played major roles in the downfall of the Old Republic and the rise of the Galactic Empire.

Geonosis / Ryloth: Geonosis, called Geonosia by some natives, was the home planet of the Geonosians, the Confederacy’s first capital, and two major droid foundries / Ryloth, also known as Twi’lek, and Twi’lek Prime, was the harsh, rocky home world of the Twi’leks, an Outer Rim Territories world located on the Corellian Run and forming one endpoint of the Death Wind Corridor. Its day and year were identical, so that one side perpetually faced its sun and the other remained in darkness, a phenomenon known as tidal locking. The dayside was referred to as the Bright Lands and the night-side was known as the Nightlands.

Bothawui: Bothawui (pronunciation (help·info)) was a cosmopolitan planet, located in the center of Bothan Space of the Mid Rim. It was the home world of the Bothan race as well as a major hub for information trafficking. It was also the center of the Bothan Spynet, widely agreed upon to be the best network of information gathering in the the galaxy. The Imperial name for the planet was Bothawui Proper.

Mon Calamari / Dac: Dac, as it was called in Mon Calamarian, Quarrenese, and Basic, also known as Mon Calamari and sometimes simply called Calamari, was a planet in the Calamari system of the Calamari Sector, located in the Outer Rim. It was home to a wealth of sentient species: the Mon Calamari, the Quarren, the Moappa, the Amphi-Hydrus, and the Whaladons. Mon Calamari was the name given to the planet by Human explorers from the Galactic Republic who first discovered and revealed the world to the rest of the galaxy. The native species referred to the planet as Dac. The planet was a shining bluish-white orb from space, due to its ocean-covered surface. It was home to 27.5billion Mon Calamarians and Quarren, as well as surrounded by the impressive Mon Calamari Shipyards.

Dantooine: Dantooine was a pleasant world of grasslands, rivers and lakes. The planet was located in the Raioballo sector of the Outer Rim at an endpoint of Myto’s Arrow, the other endpoint of which was in the Obtrexta sector, though Dantooine itself was still far removed from most galactic traffic. It hosted a small population spread amongst single-family settlements and small communities with large land holdings. Its sentient population consisted primarily of simple Human farmers, though Dantooine was also home to the primitive Dantari race. Native wildlife included the kath hound, the iriaz, the kinrath, and the graul. The planet had no industrial settlements or advanced technology by the time of the Galactic Civil War.