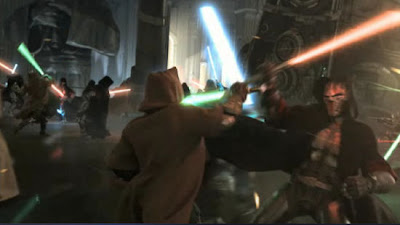 I don’t think combat has been talked up enough I think the combat advancements SWTOR is bringing to the MMO space are huge.

After looking at some videos of the combat in other Triple “A” titles out there and comparing them to combat videos we have see for SWTOR you can start to see just how impressive some of the things we have been shown are.

It’s difficult to picture until you see what we have seen in other MMO compared side by side with the combat in TOR.

This video is put together so you can see what I’m talking about, in SWTOR Lightsabers clash and collide, effects are triggered (sparks and flashes) and blaster bolts are blocked.

A cover system for the Agent and Smuggler classes could introduce a number of tactical PvE and PvP reboots as players learn how to take advantage of this system.

The pace of combat is fast and dynamic with a cinematic flavored compared to most of the top MMO’s.

I know you have all seen it but here it is again sized up against other MMO combat.
A Hard look at combat in SWTOR – Video: