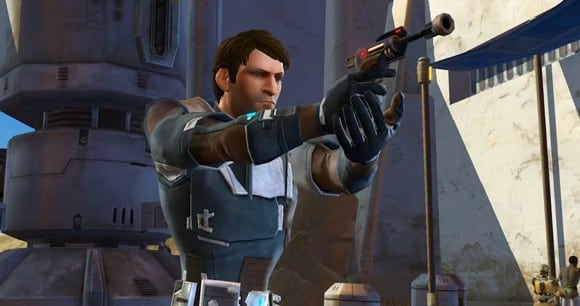 BioWare posted a Developer Blog yesterday named The Greatest Outlaw. What you are about to read is an excerpt from the official Star Wars™: The Old Republic™ Encyclopedia. It will describe an overview of all 3 Acts of the Smuggler Class story. Although we try to avoid them wherever possible, this excerpt will contain spoilers. Please read at your own risk…

Prologue
A daredevil smuggler is marooned on war-torn Ord Mantell when a gunrunning deal ends with the starship and cargo stolen by a cunning thief named Skavak. The smuggler pursues the elusive thief to recover the vessel and its payload before a notorious gangster discovers the broken deal and marks the smuggler for death. Aided by good-natured mercenary Corso Riggs, the smuggler becomes an unlikely Republic hero by taking down Skavak’s allies amongst the violent separatist guerilla fighters.

Skavak escapes to Coruscant pursuing his own secret agenda, where the smuggler must battle the Republic capital’s underworld factions to finally exact revenge. Though the smuggler recovers his stolen starship, it is too late to avoid the wrath of unforgiving gangster Rogun the Butcher. Bounty hunters fly in hot pursuit of the smuggler as a new business opportunity arrives in the form of a beautiful and mysterious stowaway.

Chapter One: The Legacy of Nok Drayen
Aided by Skavak’s former partner-in-crime, an alluring treasure hunter known only as Risha, the clever smuggler embarks on a galaxy-spanning search for the fabled lost fortune of infamous crime lord Nok Drayen. Tracking down this treasure requires the smuggler to deliver a cargo hold of exotic curios to enigmatic buyers. In exchange, the smuggler receives one-of-a-kind advanced starship technology that brings the fortune hunter one step closer to finding Nok Drayen’s riches. The smuggler ventures across deadly worlds to fulfill his contracts, including the crime-ridden megalopolis Nar Shadda and the warring noble lands of Alderaan.

The crafty Skavak hounds the smuggler at every turn, seeking to claim the lost fortune for himself. It takes every weapon in the smuggler’s arsenal, along with help from his new allies, such as the Wookiee gladiator Bowdaar, just to survive. In a legendary journey beyond the edge of the galaxy, the smuggler discovers the truth about Nok Drayen and the secret of the vanished crime lord’s legacy. Skavak uses one final trick to face the smuggler in a no-holds-barred duel aboard a collapsing starship that is falling into a black hole. The smuggler escapes certain death with a legendary tale and newfound respect from the underworld’s elite. However, there is one man who still wants the smuggler dead.

Chapter Two: Pirates and Privateers
Rogun the Butcher has not forgiven the smuggler’s broken contract on Ord Mantell. The merciless Chagrian gangster sets a trap on the bustling underworld hideout Port Nowhere. The smuggler narrowly escapes Rogun’s enforcers and inadvertently rescues a former ally: gambler and information broker Darmas Pollaran. Rogun has captured Darmas and the beautiful Senator Bevera Dodonna, intending to sell them to an Imperial Grand Admiral nicknamed “the Voidwolf.” But when the Voidwolf’s Imperial flagship appears at Port Nowhere to claim Darmas and Senator Dodonna, everyone flees to safety with only moments to spare.

In recognition of her heroic rescue at the hands of the smuggler, Senator Dodonna uses her government authority to commission the smuggler as an official Republic privateer. She contracts the smuggler’s crew to sabotage and loot the Republic’s enemies on Balmorra and Hoth. In a series of har-raising escapades, the smuggler outwits Imperials moffs and pirate kings, damaging the operations of Rogun the Butcher and the Voidwolf, and causing further embarrassment to them both.

Powerful new allies join the smuggler’s crew as they scheme the heist of the millennium and plunder an Imperial treasury cruiser. Returning from this outrageous caper, the smuggler thwarts an assassination attempt on Senator Dodonna by Rogun the Butcher. In response, Senator Dodonna task the smuggler with bringing down Rogun’s criminal empire once and for all.

Chapter Three: Final Payback
The smuggler carves a path of destruction across the exotic neutral planet of Voss and the lethal Republic prison world Belsavis to cripple Rogun the Butcher’s criminal syndicate. Finally forcing this longtime enemy into the open, the smuggler storms a hidden base on Tatooine to confront Rogun in person, only to discover that nothing is what it seems. Far from being the Voidwolf’s ally, Rogun is a staunch Republic patriot hunting Imperial spies who are destroying the Republic from within.

When the smuggler discovers the shocking identities of the Voidwolf’s Imperial spy allies, the trail leads to the war-engulfed planet of Corellia. The smuggler avenges betrayals by old comrades and finally uncovers the Voidwolf’s true plan: to gather the greatest underworld alliance the galaxy has ever seen, and use its fleet to pillage the Republic shipyards, and then Coruscant itself. As fighting between Republic and Imperial forces reaches a fever pitch, the smuggler races to confront the Voidwolf aboard his flagship and seize control of the underworld armada before it attacks. The captains of scum and villainy gladly transfer their loyalties to the smuggler, leaving the only question, whom to strike? A blind-sided Imperial fleet, or the Republic’s vulnerable forces? In the aftermath of this underworld war, the smuggler emerges as one of the most powerful leaders in the galaxy