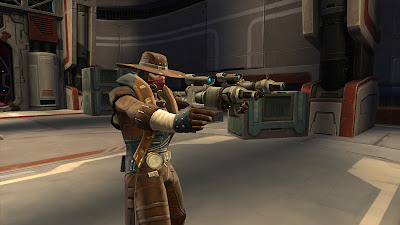 Admittedly, it looks like the team over at BioWare really want to give you the option to be Han Solo, but that’s not necessarily a bad thing. Just, please, for our sake and yours, think of a unique name to call your own. Partying with a “San Holo” or “Pan Solo,” or even “Haan Sulu” will probably give even the most die-hard fan a headache.

Anyway, while we posted a great PAX Smuggler Trailer that came out a few days ago, it seems like the SW:TOR team will not be satisfied until all of their fans are drooling at the possibilities of this dashing class. Thus, in their latest class reveal, BioWare has some more neat information for Smuggler fans around the galaxy.

First up, if you want to play a Smuggler with a little pizazz, they suggest that maybe you take a peek over at the ultra-dextrous Twi’leks, known for their charisma, good looks and… well… dexterity. All a good Smuggler needs for a balanced breakfast. As well, Smugglers will be able to grab an awesome WOOKIE COMPANION to accompany them on their travels. In this particular case, that Wookie companion appears to be “Bowdaar,” the mighty Wookie warrior, unbested in arena combat and a strong contender for the world’s strongest carpet.

Finally, the team also revealed that Smugglers will gain access to a sleek Corellian XS Stock Light Freighter, a ship that, according to this dev post, can make the “Balmorra run” in just a handful of parsecs.

In addition to this, the SW:TOR webcomic series “Blood of the Empire” has reached its twelfth and final issue, where Teneb Kel must face the consequences of his actions. Click here to read on for the conclusion!