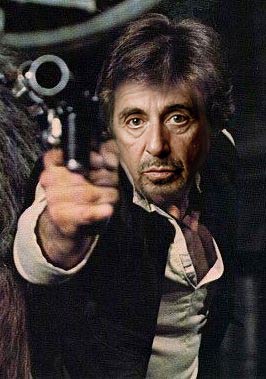 Well, that sure would have made for an interesting movie, no? Before you get all excited, it’s not happening but Al Pacino says it almost did.

“”It was mine for the taking but I didn’t understand the script,” Pacino said in London over the weekend during an event called “An Evening With Al Pacino.” Harrison Ford apparently did understand the script; he, of course, played Solo in three “Star Wars” films and is expected to reprise his role in the 2015 sequel directed by J.J. Abrams.

And apparently he’s not the only one who was offered the role but has turned it down before Harrison Ford was picked up. And there were other women in line to play Princess Leia back then too. Sissy Spacek, Jodie Foster, Cindy Williams and Amy Irving were all on the list before Carrie Fisher officially took on the role.

So what do you think- would Al have been a good Han? Could he have pulled off the role?