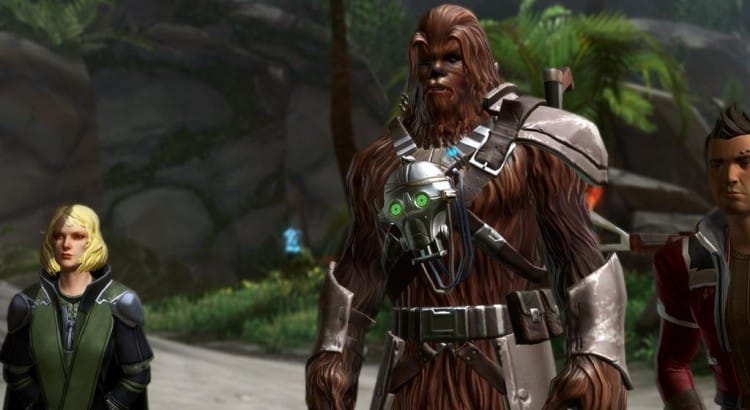 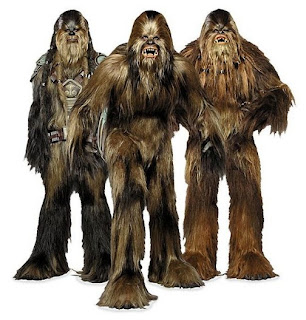 The Wookiees, whose name for themselves translated to the People of the Trees, were a species of hairy bipedal humanoids that were inhabitants of the planet Kashyyyk.

Biology and appearance
The Wookiees’ natural habitat was the dense forests of the planet Kashyyyk (though one source does contend that they were immigrants to this planet). Kashyyyk was covered with massive wroshyr trees, in which the Wookiees constructed their homes and cities. Reportedly, Wookiees were descended from tree-climbing mammals.

They had the ability to easily learn most languages. However, Wookiees lacked the vocal structure to speak anything other than their own languages.

Adult Wookiees were tall, in excess of two meters in height, and were covered with a uniform, mid-length coat of thick hair in various shades of brown. Although albino Wookiees were rare, they were not unheard of. However, such a birth was generally held to be a bad omen, as white hair did not blend in with the earth-tones of their forest surroundings.

Young Wookiees (pups) were large at birth (averaging slightly less than one meter). Wookiees possessed vicious-looking retractable claws for climbing. Female Wookiees had six breasts and gave birth to live-born young, with their gestation period nearly a year long. After birth, a Wookiee grew very fast, fully conscious and able to walk unassisted within one standard year. The average lifespan of Wookiees was around 600 years. In spite of their bestial appearance, Wookiees were highly intelligent and had mastered advanced technology, including hyperspace travel. Wookiees also possessed exceptional skill in mechanical repair. An old saying was “Give a Wookiee a knife and send him into a forest in the morning, and by evening he would have carved you a table to eat dinner on – and a house to put it in.””

Society and culture
One of the most well-known Wookiee traditions was the life debt. When a Wookiee’s life was saved by someone else, even a non-Wookiee, they would frequently devote themselves to a lifetime of service to their savior and their family. Chewbacca’s life debt to Han Solo, later extended to his family and his close friends, is one of the most famous examples of a Wookiee life debt

The most common Wookiee language was Shyriiwook. While they were capable of understanding Basic, they were universally incapable of speaking it due to their unique vocal structure. Shyriiwook was a language which was hard to hear and understand for Humans, but one Wookiee, Ralrracheen, had a speech impediment that made it easier for non-Wookiees familiar with Shyriiwook to understand him.

Wookiees possessed a fierce style of fighting, typically eschewing standard blasters and grenades in favor of bladed weapons, such as ryyk blades, as with the Berserkers, and powerful bowcasters—weapons physically weaker species could not use effectively.

Their fierce fighting style served as the basis of the Deal-slang expression “wookinate” which referred to the rendering harmless an enemy using excessive force, obviously referring to the great physical strength that provided the essence of Wookiee combat.

Under the Wookiee code of honor, claws were never to be used in combat. A Wookiee who used his or her claws for combat would be labeled a “madclaw” and exiled. Around the age of twelve, young Wookiees underwent the coming-of-age Hrrtayyk ceremony. 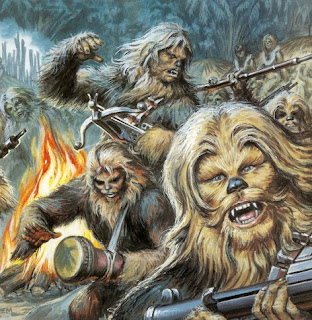 History
The Wookiees are believed to have originated on the planet Kashyyyk, part of the Kashyyyk system, though some of their lore seemed to claim otherwise. In the millennia before the rise of the Galactic Republic, Kashyyyk was a member world of the Infinite Empire. Its surface was terraformed by the Rakata for agricultural purposes, but the collapse of their empire left the machines unattended, resulting in the abnormally large foliage.

Later, Kashyyyk was discovered by Czerka Corporation, which enslaved the native Wookiees. They named the planet first “G5-623” and then, after a poll of stockholders, “Edean”. Czerka control of “Edean” was disrupted when, in 3,956 BBY, the enslaved Wookiee populace overthrew the local corporate headquarters with the help of Revan and drove all outsiders off the planet. It was presumably some time after this before Kashyyyk decided to join the Galactic Republic.

The Wookiees were welcomed into the Republic through dealings with the Corellians and Alderaanians. At least one Wookiee, the Jedi Master Tyvokka, became part of the Jedi Order. Eventually, Kashyyyk was even represented in the Galactic Senate. During the last decades of the Republic, Senator Yarua represented both Kashyyyk and Trandosha, home of the reptilian Trandoshans.