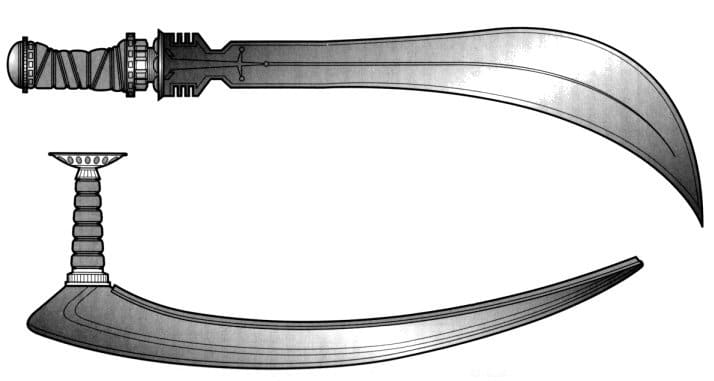 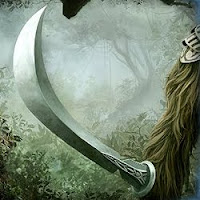 A weapon that finds its origin on Kashyyyk, the ryyk blade is the traditional melee weapon carried by a Wookiee. Ryyk blades can vary in design based on their specific origin, but generally consist of sharpened blades with hide-wrapped grips.

A Wookiee’s ryyk blade is considered, much like a bowcaster, a prized possession and weapon. It is often brandished with Wookiee writing, sometimes depicting great adventures that happened with the ryyk blades. A Wookiee who is able to successfully carry out a hunt with only a ryyk blade is held with high respect among his peers and clan members. 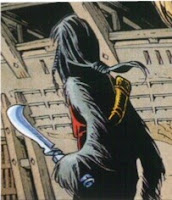 The average ryyk blade weighs about thirty-three pounds, although this is nothing to a Wookiee, who is able to wield the weapon with blinding speed and agility. Traditional Wookiee combat styles emphasize brute force over finesse, although Wookiees use the weapons with great precision, wasting no energy or motion, making them amazing and stunning warriors. The Imperials found this out the hard way during their possession of Kashyyyk.

The ryyk blades were conceived and developed when the Wookiees technology was still primitive. They lived high up in the trees, as they do today, but hunting parties often traveled down to the treacherous lower levels to gather food. They also did a great deal of exploring, carving intricate and complex pathways with their ryyk blades and also chopping vines so that the Wookiees were able to swing on them from tree to tree. Before the development of bowcasters, Wookiees relied solely on spears and ryyk blades to gather food and protect their villages.

Many Wookiees still carry ryyk blades, as dangerous predators are known to sneak into the outskirts of the cities to find food. These predators are so dangerous that the Wookiee nurseries are placed atop the highest of all the trees, and protected by groups of ryyk blade-wielding Wooks. The predators are also known to attack without warning, as Wookiees often don’t see them until they are in the air and ready to kill. There simply isn’t enough time to pull out a bowcaster and fire it, so a ryyk blade or two kept close to a Wookiee often means the difference between life and death.

Aparently it’s not easy to buy a real life Rykk blade, But what about buying a Star Wars Revenge Of The Sith Wookiee Flyer And Wookie Warrior – With Real Flapping Blades And Firing Cannons? Yeah. Support our blog. Buy it here

During the Imperial possession of Kashyyyk, the Wookiees used their ryyk blades to carve new paths through the trees, where they would set up and use them for ambush against Imperial troops. The stormtroopers were completely unprepared and unaccustomed to the planet’s terrain — or to the ferocity of the planet’s inhabitants.

Source:  Star Wars: The Essential Guide to Weapons and Technology.