A Polish online store had a potential SWTOR pre-order leak up recently that has since been taken down (or maybe the link was never valid?) but BetaCake blog has the original photo with an attempted Polish translation of the text up on their site today.
The translated description according to Beta Cake says:
“Discover the period of the Old Republic – thousands of years before the rise of Darth Vader when the war between the Galactic Republic and Sith Empire divided the galaxy. Choose and create your own character from many classic heroes of Star Wars ™ series, like : Jedi Knight, Bounty Hunter or Smuggler.
Make decisions that will define your personal story and shape your own path at the Light or Dark side of the Force. During the adventures complement to your team that you support the will to fight. You will fight an amazing fight, you will collaborate with other players to overcome the toughest challenges and discover the wonderful world of Star Wars in the best MMO game of the genre.”
Is it possible this is really a leaked promo for the game? Some are saying it’s the store promo and that the poster does not match something BioWare would put out themselves for the game. Others are saying it’s real because the art matches previous posters and art we’ve seen.
That’s the thing about beta leaks though, there are often a lot of fakes. It’s hard to say for certain if information you get from these sites is legit. It could have all been a fake from the start. While it’s an interesting story, I guess we’re really no closer than we were before into knowing a pre-order or release date.
What do you think- real leak or fake? 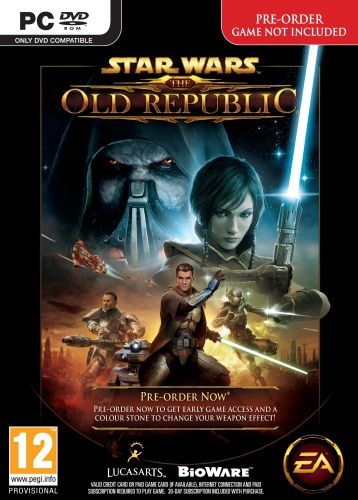 [Update]: G4TV has posted further details on what could be the TOR collector’s edition. Though it looks pretty tasty, it will also reportedly set you back 150 Euros!

Update 2: Look what we got here: