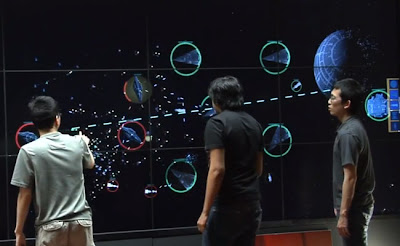 There’s a new Star Wars game on its way and we’re not talking about SWTOR! *gasp*

Fleet Commander challenges you to forget everything you ever knew about Star Wars games and discover a completely new approach. This game, developed by Arthur Nishimoto, a student at the Electronic Visualization Laboratory at the University of Illinois at Chicago, has a lot to offer that big gaming companies can learn from.
The game was initially designed in 2009 as a space strategy game. It was simple but of good quality and then evolved into a multiplayer project available for TacTile touch-screen display. Since it is not a commercial product, it could use Star Wars ships and even sound effects.
Kotaku says, “It’s the best Star Wars game we’ve seen in a long time.”
There is a 2010 version of the game available for you to see on YouTube. It looks pretty darn good but it’s the large version that really makes you excited. Touch-screen input can really do amazing things with games. This is the future of gaming and with this, we get to see what we might all have to look forward to soon as gamers.
What do you think? Without being able to try it for yourself, do you think this could be the best Star Wars game in a long time?