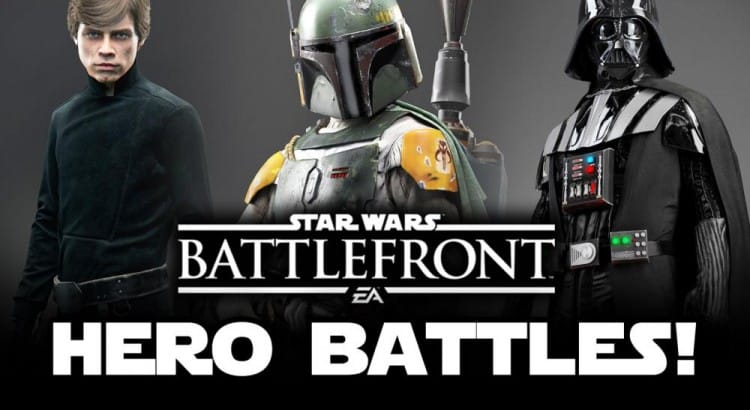 For Star Wars fans who can’t wait to get into battle as the most iconic Star Wars characters will love Heroes vs Villains, which is one of the most fantasy-fulfilling game modes in Star Wars: Battlefront. There are three dark side characters and three light side characters who fight head-to-head and you will never see as many iconic faces in one single game mode.

The lead level designer, Dennis Brannvall, has went into more detail about Heroes vs Villains and we are going to break it down.

This amazing game mode is short and has intense rounds where iconic Star Wars characters will butt heads in dynamic fights. All of the matches are divided into rounds in which three players from each team will randomly spawn as the Villains and Heroes in Star Wars: Battlefront. Simply, you will see characters like Luke Skywalker facing against Darth Vader and Boba Fett.

The rest of the team will spawn as Imperial troopers and Rebels, and it comes out to be 6 versus 6. Once a Hero or a Villain is defeated, that player respawns as a regular trooper. Your team’s goal is to take down all of the opposing teams members, or have the largest number of Hero or Villain characters alive at the end of the round.

The way players tackle Heroes vs Villains is usually based on their skill level. When beginners try it, the three Hero and Villain characters typically clash in the middle of the map straight away. However, as players become more experienced, they realize that there are more subtle ways to play the game mode. They tend to keep close to the Hero and Villain characters that can share health pickups, or try to go for the opponents supportive Hero first.

Dennis stated that he has had tons of fun playing the mode on Tatooine. You will get to experience some much defined paths here. The Heroes will start off in the control room and the Empire will spawn outside the homestead. The action mainly happens in the main hangar and you will see a Millennium Falcon. Imperial troops might have a hard time attacking through the main entrance but once they do find other paths, an amazing game happens.

So what’s it like playing as the three ground troopers? Well, you’re up against some pretty powerful foes so expect to be considered, well, expendable. That said, you’ll notice that the opposing team’s Hero or Villain characters rarely are after you – they’re chasing their powerful counterparts! And just because you’re not currently playing as a Hero doesn’t mean there’s no room for heroic deeds. Find a powerful pickup like the Smart Rocket and deal a healthy amount of damage to Darth Vader or whoever you’ve got in your sights.

Dennis also stated that it’s been amazing watching the gameplay during the early tests of Heroes vs Villains. Once the first Hero or Villain has been taken down, you will see how the team changes, typically staying away more and sneaking shots in.