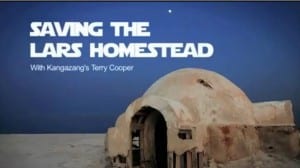 A group of very dedicated Star Wars fans took it upon themselves to recreate and build the “Lars Homestead,” which was featured as hero Luke Skywalker’s home in the first-released installment of the series, “Star Wars Episode IV: A New Hope,” in 1977, again in the 2002 release of “Star Wars Episode 2: Attack of the Clones,” and finally in the last movie theatrically released, 2005’s “Star Wars Episode 3: Revenge of the Sith.””

The igloo-shaped home, was a venture that fan Mark Dermul of Belgium began dating back to April 2001, noted on the fan’s official website, where he traveled to the African nation of Tunisia to locate where filming for the “Star Wars” series was done. Dermul and a group of other “Star Wars” fans from around the world ventured back to the Tunisian desert over the years, as part of their “Tatooine Reunion,” noted the website, and by May 2010 took note of the terrible state the “Lars Homestead Exterior” had been in.

By July 2010, noted Dermul’s website, he launched his project for the restoration of the “Lars Homestead” to take place in the Chott el Gharsa, southwest of Nefta in Tunisia, as a way to save the iconic film landmark.

With the blessing from the Head of Fan Relations at Lucasfilm, who owns the rights to the “Star Wars” series, and the assistance of the Tunisian Tourism Office in Tozeur by summer 2010, Dermul begins his journey for the restoration of the home.

Dermul, through his website, asked for donations adding up to $10,000 to help fund the project to restore the “Lars Homestead,” which it reached in 10 months since initially launching, by May 2011, said Dermul’s websie. Negotiations are starting the actual project were still currently underway, and after years of trying to work with the Tunisian government, Dermul and his team finally received authorization from the government to go forth with their plans, by December 2011.

Dermul and his team, including other “Star Wars” fans like Mark Cox, Terry Cooper, Robert Cunningman, Michel Verpoorten, and Imauel Dijk commenced their project in May 2012, and had fully completed it after a week’s worth of work, noted Yahoo!, in 115-degree weather.