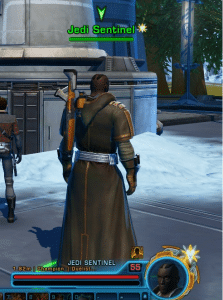 Due to complaints on the official forums, BioWare will be changing the Furious PvP title from Season 3 ranked PvP to Fairly Furious

Read the full update here or below:

I wanted to tell you about a change coming to one of your titles, the Furious. As many of you pointed out, this title already existed in game prior to the end of Season 3 rewards. We really apologize for this happening, it was an unfortunate oversight on our part that it got through and we want to correct that oversight. As of 3.0.2 anyone who currently has The Furious from Season 3 will have it replaced by Fairly Furious. If you still want to have The Furious title, you can just jump on over to Makeb and defeat the Golden fury to earn it.

Now, one thing we also know with Season 3, is that some of you weren’t the biggest fans of the titles. We are always looking to improve our PvP rewards, and titles are no different. So although we are only changing The Furious title, we know you would like to see improved titles in the future. Please continue to make suggestions around titles and rewards you would like to see for future seasons.

TLDR – We are changing The Furious title reward from Season 3 to Fairly Furious since it previously existed in-game. Thanks everyone.