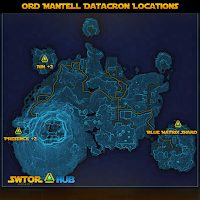 Ord Mantell was a planet in the Bright Jewel Cluster. It was located near Anobis in the Mid Rim. It was originally settled in 12,000 BBY as an Ordnance/Regional Depot.
During the Cold War in 3,653 BBY, a corrupt admiral sold off the local fleet, and so the military all but abandoned the planet, leading to the lawlessness Ord Mantell eventually became known for, and the haven for mercenaries, exiles, murderers and smugglers. After the Treaty of Coruscant, the corrupt local government decided to stay loyal to the republic, however separatist residents attempted to break away. This lead to an armed civil war in an attempt to achieve independence, and a military buildup assisted by local government supported crime syndicates and Galactic Republic forces destabilized the world further.

Read more aboutOrd Mantell here, and check out the Datacron locations below:
Don’t forget to check out constantly growing list of guides for Star Wars: The old republic