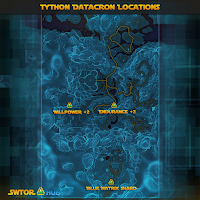 Tython was a planet located within the Tython system of the Deep Core. It was the planet where the Jedi Orderoriginated, in the form of the first society of Force users in known history, sometime between 36,453 BBY and 25,990 BBY.

Tython was cleansed of terentateks by the Great Hunt in 3,994 BBY. In the aftermath of the Great Galactic War, the Jedi Order relocated to Tython following the Sacking of Coruscant in 3,653 BBY. There, they attempted to rebuild their order, despite trouble with a local Twi’lek pilgrim colony and a mysterious influence emanating from the world itself.
Read all about Tython here, and check out the datacron locations below:
Don’t forget to check out constantly growing list of guides for Star Wars: The old republic
9 – [Endurance +2] X,Y: (-33, –101). This Datacron is in a cave on a mountainside that you can see from the trail to the Forward Camp. East from the Forward camp is the entrance to the cave located in Flesh Raider Territory at x:-28,y: 55. Simply follow the cave path, killing a few level 6 enemies along the way for the Datacron

11 – [Blue Matrix Shard] X: -91 Y:93 Z:920* South of the Forge Remnants, there is a path starting at x-175, y:802 that leads to the Datacron. The Datacron is on a slightly raised area inside of a ruined building with an Elite Flesh Raider worshiping it.