Yes! It’s Friday again, and that means two things: Weekend with lot’s of beer and more news from Star Wars: The Old Republic. This time we get the monthly “The Studio Insider” wich gives us a glimpse of what it takes to produce a multi-million dollar MMO. In this issue of the Studio Insider, concept Artist Diego Almazan shares another step-by-step demonstration of the creation of the Flesh Raider, from base sketch to fully tricked-out creature.

When starting a concept, it’s important to get as much information as possible to help make the creature or object fit best in its place in the game. For this concept in particular, I was excited to take on the task of creating an alternate Flesh Raider which would fit alongside the current set.


After gathering and studying art work and other assets related to the Flesh Raider, I started off with a base which is a rough body sketch similar to an existing one in the game. At this point I was not exactly sure how far we wanted to stray from the original design, so in terms of the head and protrusions on the body I threw out some different ideas on what could be done. I tried not to spend too much time on the base, but wanted to give enough detail so there was a clear idea of what I have in mind. I even threw in a crazy wacky one to see if the team wanted something completely that deviated from the current Flesh Raider model. 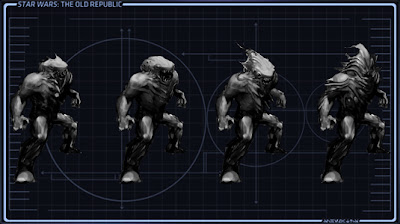 Of course they go for the crazy one! I have not added any armor yet, so naturally this model has the most striking silhouette. 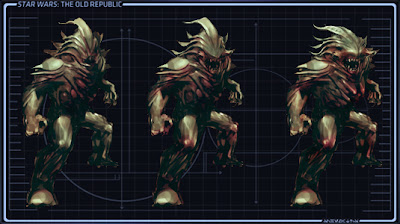 
Community member Yssta created some beautiful painterly pieces of Star Wars art. They are listed in The Work of Sturman (Yssta) with the most recent works at the top. Fantastic details!
WovenKash from the community is showcasing some Lightsaber images in the forums. Browse through the thread to get a look at all of these remarkable 3D concepts! Stunning!
Community member Xanfel was inspired by all the concepts art for The Old Republic. Get a look at some gorgeous Jedi and Sith paintings in Xanfels Art Thread. Great work!
Fan Fiction
“Nothing is ‘pure’, Simplicio. Emotions do not have defined beginning and ends, even though we pretend that they do by giving them arbitrary names.” The story Master and Apprentice: Secrets of the Sith written by community member Darth Slaine follows a Sith master and apprentice through their experiences. It provides an in-depth and thoughtful depiction of Sith teachings, mixed with a decent amount of humor, action, and suspense. This is a cleverly written, must-read piece of fan fiction!
“Therion Foxglove meditated. His muscular chest rose and sank in a steady rhythm of one breath per minute, his eyes unseeing, his mind like the surface of a wintry lake hardly moved by emotions, while he reviewed the events of the day. A ripple of sympathy and care for the younglings he had lectured earlier came with the memory, and as with all emotions he acknowledged it, studied it, and allowed the disturbance to subside until the emotional content of the memory was discharged and his mind was again unmoved in the cool, clear light of the force. There was no emotion, there was peace.” Read more of community member’s blauregen story titled Foxglove. A Jedi Knight

Finally, two polls have been added to the Surveys and Polls section of the official site. Don’t forget to vote:


* First poll: What is your Star Wars weapon of choice? Vote here.
* Second poll: What excites you the most about the Crew Skills system? Vote here