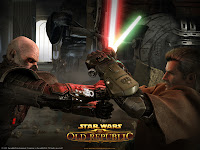 Corellian Run Radio discusses the Fan Fiction Contest that is now underway. Kellmorn, Star Wars: The Old Republic forums, is putting on this contest and you can be a part of it by sending in your submission right away. Several forms of submissions are acceptable which include comic, written pieces and audio so choose the one that you can do the best.

A sketch must be provided along with the submission of the main weapon or gadget used by the character but don’t worry, it’s not about how good you can draw. It’s so Ironcleaver can produce an award for them. The eight winning submissions will receive a high quality 3D image of the main characters weapons or gadget, which is a unique and exciting prize. The Grand prize winner’s piece will be “acted out and recorded in an audio-book format by The Followers of Palawa”.
Each submission is done by the Character’s class, which can be found in the “official Old Republic forums”. For a list of links that will take you directly to these links so you can make the submission for your character, visit Corellian Run Radio.
The submission stage runs between August 1st-14th and voting stage runs between August 14th-21st. The winners will be announced on August 22nd followed by rewards given out and the “Grand Vote off” begins August 28th – September 4th. Get started on your Old Republic based story now so you don’t miss out on this amazing opportunity.