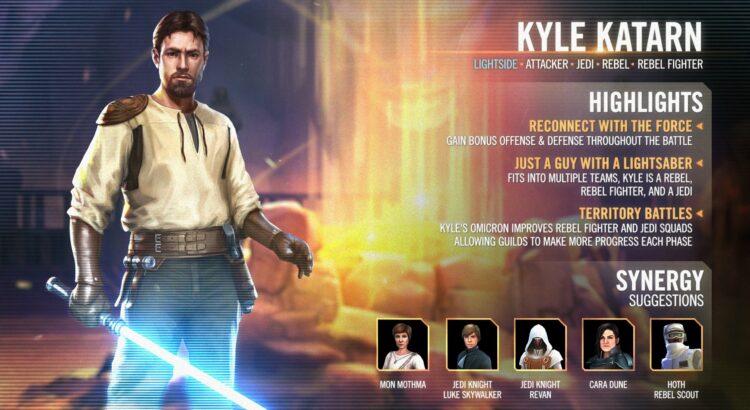 The guys over at Capital Games has posted a new developer insight. This time they are talking with the designers of Kyle Katarn, the legendary Jedi and Rebel operative is coming to the holotables!

Below, we take a dive into the developers’ motivations and inspirations while creating the kit for this fan-favorite Star Wars: Jedi Knight and Dark Forces character.

Basic: THIS SHOULD BE INTERESTING

Special 1: JUST A GUY WITH A LIGHTSABER (Cooldown 3)

FINAL TEXT: Deal Physical damage to target enemy twice. If the target has Force Influence, the second instance of damage deals 75% more damage. All allies gain Critical Chance Up and Potency Up for 2 turns.

Special 2: POWER OF THE VALLEY (Cooldown 3)

Jedi Knight: Inflict Force Influence on all enemies for 2 turns

Whenever a Rebel Fighter ally attacks out of turn, they gain 12% Offense (stacking, max 60%) until the end of their next turn.

Whenever Kyle Katarn attacks out of turn, he gains a stack of Force Connection until the end of battle, which can’t be copied, dispelled, or prevented (stacking, max 10 stacks).

While in Territory Battles: Enemies can’t gain bonus Turn Meter and Force Influence can’t be resisted. When Kyle Katarn attacks out of turn, he gains an additional stack of Force Connection, and the bonuses of Jedi Knight also apply to other Jedi allies. At the start of each encounter, all Jedi and Rebel Fighter allies gain 75% bonus Protection until the end of the encounter. At the start of each encounter, Kyle Katarn gains 10% Turn Meter for each other Jedi ally.