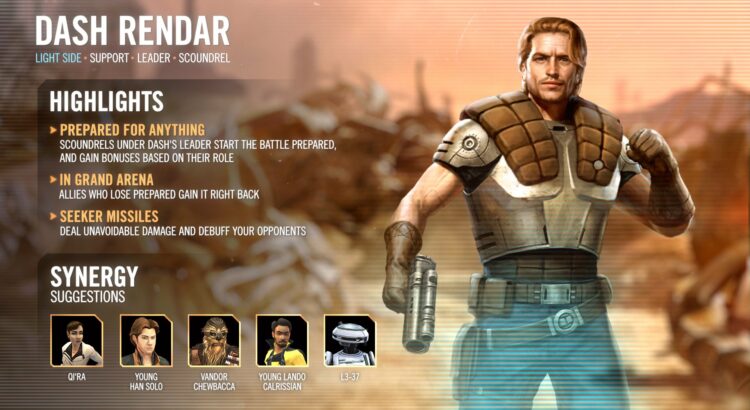 The guys over at Capital Games has posted a new developer insight. This time they are talking with the designers of Dash Rendar. The beloved train-hopping, shoulder-pad adorned hero of legendary lore is ready to lead a motley crew of Scoundrels into the Grand Arena gauntlet!

Below, we take a deep dive into the developers’ motivations and inspirations while creating the kit for this fan-favorite Shadows of the Empire character.

FINAL TEXT: Deal Physical damage to target enemy and dispel all buffs on them. Then, Stun them for 1 turn. This attack deals 20% more damage for each buff dispelled.

Leader: PREPARED FOR ANYTHING

FINAL TEXT (OMICRON): Scoundrel allies enter the battle Prepared, and Prepared allies gain an additional bonus based on their Role, doubled for Light Side Scoundrels. Whenever a Scoundrel ally gains Prepared, they gain Critical Damage Up and Offense Up for 1 turn.

While in Grand Arena: If an ally loses Prepared, they gain Prepared.