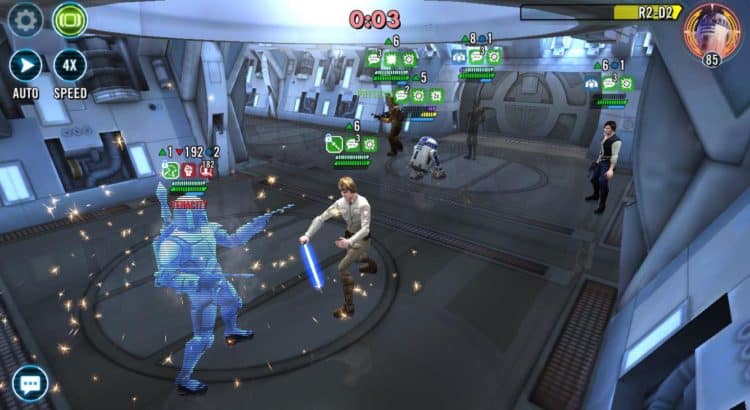 Here are the news from Capital Games on the Grand Arena Championships. No one still have a clue what it is about, ot at least what the GP divisions is about, but Wall of text will crit you.

Grand Arena Championships are a five-week series of Grand Arena events and Feats. Our goal is for the experience to feel like a normal Grand Arena event with a few bells and whistles, and then gradually ratchet up the competition and drive for the players who make it up to higher leagues in later events, until by the end of a Championship, it feels like the sharpest competition that the game has to offer. In this post, we’re going to talk about GP Divisions, a feature that enables us to curate the best experience (AND relevant rewards) for all Grand Arena players regardless of their time in game or collection size.

This is essentially because we want to provide different rewards and different scoring mechanisms for players, more or less based on the number of squads they are able to field and the rewards and tradeoffs that are relevant to them. And now that matchmaking is less directly impacted by overall GP (see our earlier post on this), this essentially means that outside of optimizing the squads you are using in Grand Arena, your GP is something that you can still work on in the long-term without worrying about its impact on your Championship progress.

What does this mean practically? Essentially, Divisions allow us to do a couple of things:

We have tried to match the number of defenses required and the League Promotion thresholds to fit each Division effectively, and are looking forward to seeing how players clear these hurdles across all GP levels.

Leaderboards
Alongside Grand Arena Championships, we’ve invested heavily in leaderboards, in order to provide a strong competitive background that does not simply just recreate the dynamics of Squad Arena and Fleet Arena, but still essentially feels like a competition. GAC will launch with four leaderboard types – Global, My Ranking, Guild, and Ally.

The Global Ranking is just that – a snapshot of the top 50 players in each League, per Division, ranked by Championship Score. It updates in near-real-time as players get promoted into higher and higher Leagues, and resets at the start of each Championship. Your ranking and basic stats will always be visible in GAC Leaderboards so that you can compare your progress against the very best across Leagues, rankings and even Divisions.

My Ranking is the same ranking as Global, but extending down to where you are in the ranking of Championship Score, in your rank and Division. (Unless of course, you’ve hit the Top 50, in which case you’ll show up in Global too. Congrats, by the way.) This way, even if you are not one of the top players, you can see what you have to do to climb the ranks into a higher ranking. We should also note that reaching certain rank thresholds in a League result in slightly higher rewards – and we have plans to eventually further reward the very highest players in Kyber in each Division.

Finally, Guild and Ally leaderboards operate across Divisions and Leagues and provide a bit of friendly competition between you and your guildmates, or you and the list of allies/friends/shardmates/nemeses that you can customize. We’re not rewarding based on these leaderboards at this time but are looking forward to incidental competition and fun amongst friends separate from the hard-edged competition of the global leaderboard!

Thanks for sticking with this long, detailed post, and stay tuned for more information on the Grand Arena Championships schedule and Exhibition Championships in the next couple of days!