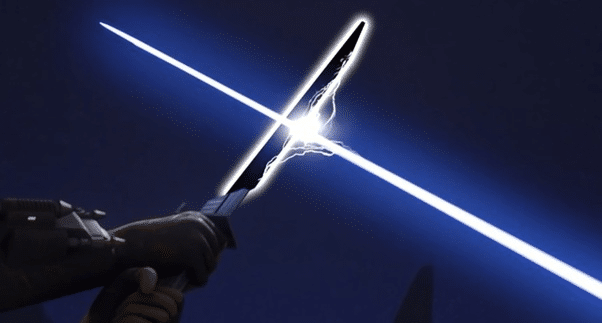 The dark saber is a weapon that is shrouded in mystery and legend within the Star Wars universe. It is a black-bladed lightsaber that was wielded by the first Mandalorian Jedi, Tarre Vizsla.

The dark saber was created over a thousand years before the events of the Star Wars films, in a time when the Jedi Order was still young and exploring the possibilities of their powers. Tarre Vizsla was a member of the Jedi Order who hailed from the planet Mandalore, which was known for its warrior culture and martial prowess. Vizsla was able to harness the power of the Force and channel it into a weapon that was unlike any other lightsaber.

The dark saber’s blade is unique in that it is black in color, rather than the typical blue or green of most lightsabers. This is due to the fact that the dark saber was created using a different type of crystal than the ones typically used in the construction of lightsabers. The dark saber’s crystal was mined from the heart of a black Krayt dragon, a fearsome creature that lived on the planet Tatooine. The crystal was then carefully attuned to the Force by Tarre Vizsla himself, imbuing the weapon with immense power.

The dark saber’s power is not only in its unique crystal, but also in the skill of its wielder. Tarre Vizsla was a master of the lightsaber, and was known for his incredible speed and agility in battle. He was able to use the dark saber to cut through even the toughest armor and weapons, making him a formidable opponent on the battlefield.

Despite its power, the dark saber was not without its drawbacks. Because it was created using a different type of crystal than other lightsabers, it was difficult to repair and maintain. If the weapon was damaged, it was nearly impossible to fix, and the only option was to create a new dark saber from scratch. This made the weapon rare and highly sought after by those who knew of its existence.

After Tarre Vizsla’s death, the dark saber was passed down through the generations, always staying within the hands of the Mandalorian people. It became a symbol of their culture and heritage, and was passed down from one leader to the next as a sign of their power and authority.

However, the dark saber’s history is not without conflict. Over the centuries, the weapon has been stolen and fought over by those who sought to possess its power. It has been wielded by both Jedi and Sith, who have used its unique abilities to further their own agendas.

One of the most notable wielders of the dark saber was Darth Maul, a Sith Lord who was trained by the evil Emperor Palpatine. Maul wielded the dark saber during his duel with Qui-Gon Jinn and Obi-Wan Kenobi on the planet Naboo, using its power to nearly defeat the two Jedi knights. However, the weapon was eventually destroyed during the duel, and its remains were scattered across the planet.

Despite its tumultuous history, the dark saber remains an iconic and powerful weapon within the Star Wars universe. It is a symbol of the Mandalorian people and their connection to the Force, and is revered by those who know of its existence. Although it has been lost and destroyed many times, it is said that one day it will be reforged and wielded once again by a worthy warrior.