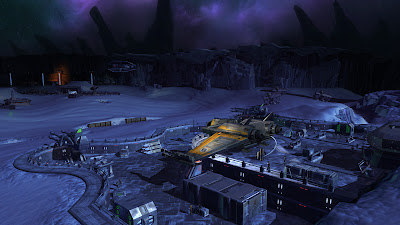 Today’s official update is a planet reveal. And a surprising one (to me anyway) at that. After Hoth already having been revealed I’m surprised to see another ice planet. But regardless, BioWare revealed that they have included the ice planet<span< a=””> class=”Apple-style-span” style=”color: #cccccc; font-family: ‘Trebuchet MS’, Trebuchet, Verdana, sans-serif; font-size: 13px; line-height: 20px;”> Ilum in the game. Here is the official news:

With the final outcome of the war between the Sith Empire and the Galactic Republic still undecided, the icy planet Ilum sits squarely in the cross-hairs. The crystals that grow here in abundance are the source of incredible power and possibility. Jedi and Sith alike have long sought them for their Lightsabers, but the ramifications may go much deeper.

Recently the Empire launched a major assault against the Jedi on Ilum, destroyed the Order’s sanctuaries, and initiated an ambitious operation of unknown intent. With its forces already spread thin, the Republic has been unable to strike back in such a remote region, but what price might they pay for losing this valuable resource?

Access the HoloNet to learn more about Ilum. Check out this video to see images of the icy terrain, as well as the crystals themselves. Also, don’t forget to visit the media section for never-before-seen screenshots, concept art, and wallpapers showing the scene from every angle.

And as usual they also have a new wallpaper for the planet:

Learn more about the planet, as well as look at new screenshots and concept art, onthe HoloNet page.