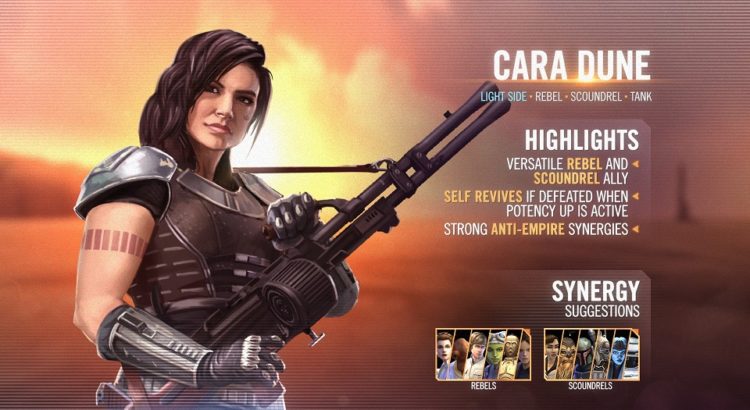 Cara Dune is comming to Star Wars Galaxy of Heroes. Here is a run down of this veteran Rebel Shock Trooper who has reinvented herself as a mercenary since leaving military life behind.

This tough, no-nonsense brawler hasn’t forgotten how to fight an enemy like the Empire and can be difficult to take down in battle.

While Cara can find a place as a deadly ambusher on a Scoundrel squad, she’s equally at-home under a Rebel leader, defending her allies as a front-line combatant.

UNIT NAME: Cara Dune
ALIGNMENT: Light
CATEGORIES: Light side, Tank, Rebel, Scoundrel
A Scoundrel/Rebel Tank who gains benefits when being led by either.

FINAL TEXT: Cara Dune gains Potency Up for 1 turn then deals Physical damage to all enemies and removes 50% of their Turn Meter. Empire enemies are Stunned for 1 turn.

FINAL TEXT: While Stealthed, Cara Dune has +100% critical chance and +50% critical damage. When Cara Dune loses Taunt, she gains Stealth for 1 turn at the start of her next turn.

FINAL TEXT: (ZETA) Cara Dune gains Critical Hit Immunity for 2 turns and +100% Turn Meter whenever an Empire enemy is defeated, and half that amount for non-Empire enemies. If Cara Dune has Potency Up when she is defeated, she is revived with 50% of her Max Health and gains Potency Up for 1 turn.