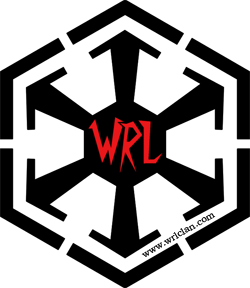 It’s Thursday and time to look at a new SWTOR guild. This time the “World Renown Legion” took the time to answer our questions. If you want your guild featured on swtorstrategies.com drop us a line.


Where did your guilds name come from?
The creator of the clan gave the original name “world rich leaders”. A year or so later, we changed the name World Renown Legion as the best name that we could come up with to match the WRL acronym. We pretty much go by {WRL} now.

Can you give me a quick 2-3 sentance description of your guild?
We are a brotherhood. We are a group of friends who value loyalty and respect regardless of the game we are playing.

How did your guild come about?
A young man from the Netherlands started the clan in late 2005, originally as a player hosted server on Star Wars Battlefront II. Since that time, the clan has changed hands. Key members (specifically the overall leader of the clan) put forth a lot of time, work and money to build the clan to the point of where it is today. Other members have shown incredible loyalty over the years as they have contributed their time, work and money.

What kind of play style do you focus on? PvE, PvP, RP:
PvE to start. Some of our members are experiencing their first MMO with SWTOR – we want the transition to be smooth.

What is your guild set up? How do you run your guild?
We keep our set up loose, cool – not too serious but serious enough. If you’re an active player and you can integrate with us you will love it even if it is simply to be among friends on Ventrilio and gaming.

How serious do you play and/or run the guild?
How serious the administration of the guild or clan in game depends mostly on the game and those playing that game. At times, some games require serious scheduled practices and matches and at other times that isn’t required. With SWTOR it remains to be seen.

Do you have ranks or a certain hierarchy in your guild?
We have a loose ranking system which more shows a level of time and dedication and not so much a certain level of “power” within the clan/guild. We have leaders, we have “go to” people, and we have members.

Why did you choose the Republic / the sith empire?
We are sith. The majority of our members said “hell yeah, Sith” when information started flowing out about the game over the past year or so.

Why do you run a guild?
We have leaders for each game we play and we have overall leaders. The common response is: for the love of WRL. We run it to keep it running and we run it for the love of time spent gaming with the clan/guild. It’s all about the pure overall enjoyment of having a group of friends that you can depend on even over time, even from one game to another. A common flaw with gaming clans is that they fail when a game falls out of favor – especially with FPS clans.

How do you approach Raid Planning?
We have no set approach at this time. Our first priority is to build a strong clan of dependable SWTOR players. We want to ensure that once the game is released we can have a force to be reckoned with. Upon release we intend on ramping up recruitment. With a force of mature, dependable players we can ensure smooth raid planning.


Age Requirement?
We don’t have an age requirement currently– we require people of a certain level of maturity. Unfortunately that means a possible move toward 18+, however, we’ve had members for years who are younger.

Guild size?
We have an overall clan of 100+ members. We currently have a force of anywhere from 5-12 SWTOR members. Some have yet to play the game and sit on the fence.

What makes your guild stand out from everyone else? What makes your guild unique?
We are a group of people who are friends first. No matter the game, whether it be SWTOR, rolling on a ladder on COD, or playing some poker with the boys – we do it because we enjoy the company of our brothers and sisters of WRL.

How do you spend your time until release? Do you know each other in real life or do you spend a lot of time on forums?
We’re a multi-game clan/guild. Our time is spent in other games or xfire/steam/ventrilio.

What Other Games are you currently playing as a guild?
There is no short answer to this question other than stating that we play any game that interests our members. We get more serious when we have more than a few members interested in any particular game. We have members playing WoW, COD (more than one version), BF3, and so one. We even play online poker, minecraft, ikariam, and so on.

If somebody is interested now how and where can they apply for membership?
The easiest way is to head on over to www.wrlclan.com. Register for the forums and introduce yourself in the new member section. We also have an application on the main page, however, it is somewhat dated.

One last question, if there was one thing you could ask the Dev’s to include, what would it be?
A: How can you improve space combat? and where are you on the guild controlled capitol ships? 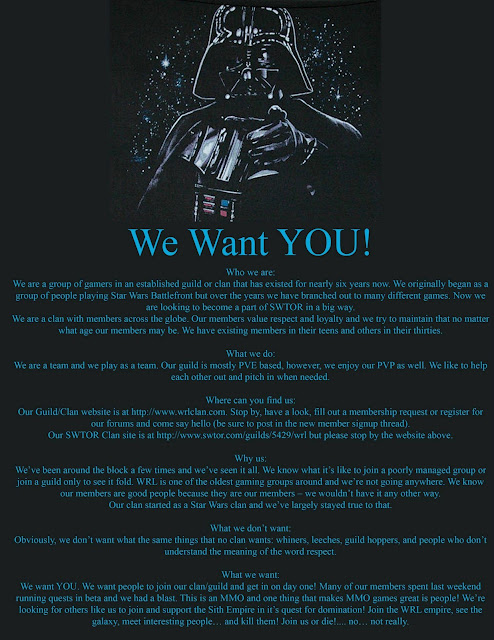