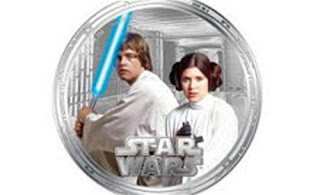 Even the Queen loves Star Wars. Well, sort of anyway – because The Telegraph are reporting that she is set to share space on a set of coins with the cast of the franchise.

According to the British newspaper, characters including Darth Vader, Luke Skywalker, Yoda and a cast of other heroes and villains from a galaxy far, far away, will feature alongside our own beloved Queen on a set of 40 coins issued by the South Pacific island state of Niue. The remote Polynesian state – population 1,400 people – normally uses New Zealand currency, but they’re bound to be the envy of the Star Wars loving world when the coins are eventually released.

The coin sets are aimed at collectors and investors around the world in a bid to boost Niue’s comparatively grim economy – if only every other government was that logical and proactive! The price for a set of four coins, each containing 1oz of silver, will be set at NZ$469 (£235).
As legal tender, the coins will have a face value of NZ$2 (£1), though both the silver content in each and the huge collectibility factor will make them worth considerably more (even more than the suggested value above I’d say). Though I can’t really see anyone actually spending them – unless in a drunken stupour, or while facing the ultimate, terrible dilemma of a pay toilet and an urgent feeling in the pit of their stomach. But even then, the other option would be infinitely more appealing than unthinkably losing one of the coins!
Look out for the whole sets being released – and buy a set if you can, they’re only going to increase in value.