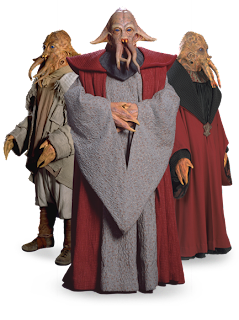 Quarren, or “Squid Heads” as they are sometimes rudely called, are an alien species characterized by the four tentacles that protrude from their jaws. They have deep turquoise eyes, and each hand is capped with finned or suction-cup tipped fingers. They are capable swimmers, and like the squids they resemble, they are able to spit out clouds of ink as a defensive measure. Quarren hail from the planet Mon Cala, a world they share with the Mon Calamari.

The Quarren evolved in the depths of Dac’s oceans. When they were first discovered by the Mon Calamari (who evolved in the shallow parts of the ocean and on Dac’s few islands ), there was conflict between the two species. Circa 4,500 BBY, the Quarren attacked the Mon Cals. However, the Mon Calamari, though less aggressive by nature, had much better technology, and won the war. In order to prevent future wars, the Mon Calamari took hundreds of young Quarren prisoners, taught them the ways of Mon Calamari civilization, then let them free. After the re-educated Quarrens gained control over Quarren civilization, peace between the two peoples continued for centuries (though it was sometimes a tense relationship).

Other accounts dispute this origin — that there was actually a Quarren member of the Senate, long before the Sith Empire ever came into being, and that Quarren were seen on such remote and unlikely worlds as Tatooine.

Whatever the truth, Quarren are not found in great numbers in the galaxy at large, and tend to be fairly quiet and solitary.

Personality: Generally quiet and contemplative, rarely given to banter or heated arguments. Often conservative and solitary, not given to taking wild risks.

Physical Description: Quarren are amphibious humanoid aliens most visually notable for their heads, which have an elongated, tapered braincase, visible gills, and four nearly vestigial tentacles sprouting from each side of the “beaked” mouth. The skin of Quarren varies in color, ranging from steel grey to bleach white, muddy brown to seafoam, bright red to salmon pink, with varying mottles, spots and/or stripes. Otherwise human-like hands have two fingers and a thumb, each digit ending in a suction cup. Adult Quarren stand between 1.4 to 1.9 meters tall, and smell of brine.

Quarren Homeworld: Apparently Calamar, but there is speculation that they may have other-worldly origins.

Language: Quarren have their own language, though some learn Basic and Calamarian.