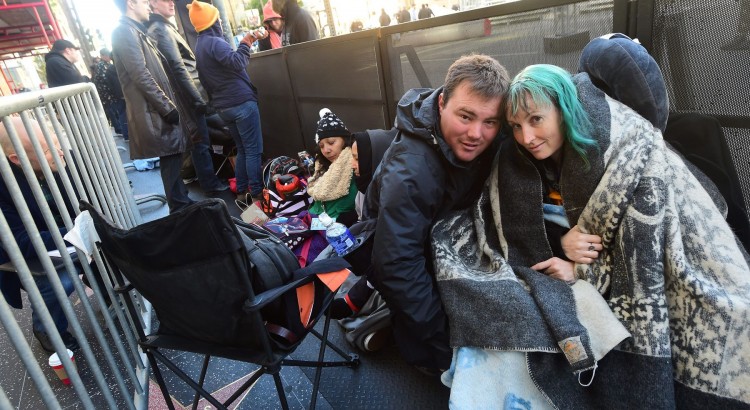 Caroline Ritter and Andrew Porters of Hunter Valley, Australia did what no other Star Wars fan has ever done. They got married while standing in line waiting to see the new Star Wars: The Force Awakens movie premiere. Can you think of a better way to start your new life together as a married couple?

On Thursday, December 17, these dedicated Star Wars fans had a wedding ceremony they will never forget. After camping out near the front of the line at the TCL Chinese Theater in Hollywood for twelve days, the couple said their I do’s. After the ceremony they went inside for one of the most exciting and unique wedding receptions in history.

It was the theater’s idea. They wanted to do something special and unique for the fans viewing the movie at their establishment, so they asked if anyone wanted to get married on premiere day. Of course, there was no way the couple could turn down this once in a lifetime opportunity.

The wedding party included a Jedi knight playing the Imperial March on the violin, Chewbacca, a Stormtrooper and the best man was R2D2 dressed in a bow tie. Darth Vader walked the beautiful bride down the aisle and a friend of the family dressed as Obi-Wan Kenobi performed the ceremony in a way that only a Star Wars fan could.

Caroline looked stunning in her traditional white wedding gown that took on a galactic twist when she added “handmade crystal X-wing starfighters”“. When the ceremony was over, IMAX gave the couple $5,000 for their honeymoon and donated another $5,000 to the Starlight Children’s Foundation on their behalf.