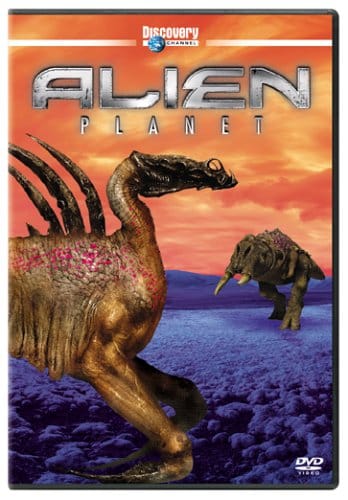 I know it has been a while since I last posted a documentary. But Xmas and new-years have taken all my time. Now we are back with a new documentary. This time we are focusing on life on other planets, and as a product of speculative science it is pretty impressive. Using computer graphics it shows how a mission to explore an Alien Planet would be conducted by Earth employing a sublight spacecraft delivering sophisticated probes to the surface.

The program explains step-by-step the mission as the probes encounter strange life forms, with frequent asides by scientists who explain how such life forms might evolve and live. Using computer animation, the program is very good. If it has a flaw it is in the asides, which frequently go back to something discussed five minutes and a couple of segments ago.

I have watched this Discovery Channel program countless times. It continues to haunt my unconscious. The premise: A few hundred years from now, a space probe from Earth travels to a planet several light years away. Airborne robots are deployed to explore, analyze & send back video footage of the life forms on the planet, yclept Darwin IV.The life forms range from microscopic bacteria & extremely dangerous “BeachQuill” plants, to the predatory “Skewers” (a cross among terrestrial flying foxes, woodpeckers and vampire bats), gigantic “Grovebacks” (bipedal animals that support tree-like plantlife), & an “ocean” that is itself a single multicelled entity, along with the disturbingly intelligent “EoSapiens.” The CGI imagery is weird & unlike anything I’ve seen anywhere else, with the possible exception of “Forbidden Planet.” The fantastic (in both senses) narrative is supported by funny & intelligent interviews with real scientists such as Stephen Hawking, Michio Kaku & Jack Horner. Highly intelligent, educational & definitely not for young children.

Imagine a world like our own, just 6.5 light years away – but teeming with life forms unlike anything found on Earth.

Take a simulated journey into the near future, where astronomers and biologists alike marvel at the potential of Darwin IV, a nearby planet with two suns, 60% gravity and an atmosphere capable of supporting life. Having identified Darwin as a likely home for life, scientists send a series of unmanned probes to the planet. Initially, the expectation is to find microscopic life. But the probes soon find themselves in the middle of a developed ecosystem, teeming with diverse creatures of all sizes.

Peering through the “eyes” of the probes, marvel at the planet’s bizarre inhabitants – like the lumbering Groveback, which supports a mini forest of vegetation on its back; deadly Prongheads who hunt in packs like wolves; and the graceful Gyrosprinter, an elk-like creature with a body dotted by luminescent biolights. The look and biology of each animal is based on the laws of evolution and physics, then modeled to fit the hypothetical environment of Darwin IV. Leading minds in the fields of paleontology, astrophysics and astrobiology explain how these creatures might evolve otherworldy characteristics like hollow bodies, “jet” propulsion and piercing tongue skewers.

One of the best shows I have ever seen. The attention to detail both in the environment and in the creatures is amazing. As both a scientist and a computer artist I can find no fault with any portion of this production other then it comes to an end and leaves my wanting more. The fact that there can possibly be life on another planet and we will soon have the technology to observe that is mindblowing. It has really gotten me interested in space and the creation of life. I thought it was very educational to watch. It fits in right along with Dinosour Planet, Future Is Wild, and the Walking With Series. Also good entertainment value, I hope they make a sequel