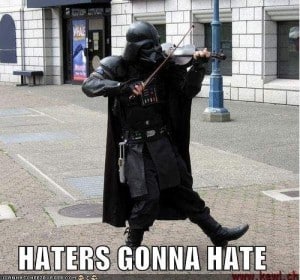 Due to recent events, there have been many putting down the game of SWTOR and many who have lost faith in BioWare. When I tweet an update or a story, I get several responses telling me how “SWTOR has died” and the game sucks. I believe in freedom of expression and I respect the opinions of others and their rights to have such opinions but that doesn’t mean I agree with them.

I’m not sure SWTOR is dead yet. I can understand the dissatisfaction some people are feeling. There are some things that I was really bummed at about the game, too. But there are also a lot of great things about the game. I feel like some people didn’t give it a fair enough chance. They tried it and thought ‘it doesn’t have everything I want’ and they quit.

While some players were let down by the game, there are still many who never gave it a fair chance. They were uncomfortable with certain parts of the game and they just quit and walk away, complaining along the way. But are all the “haters” really being fair to SWTOR?

Bioware seems to be listening to the players and taking in the complaints. They want to succeed. Why would they want to create a sucky game? Why would they work weeknights and weekends and spend hours away from their families and loved ones to invest in a game that people will hate? It just doesn’t make any sense to think BioWare would want to invest so much time and money into a game and then create a fail on purpose. 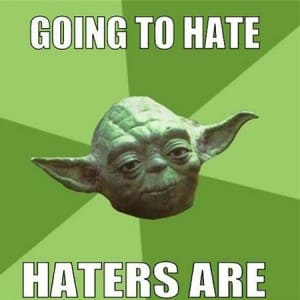 Was everything perfect? Nope. But it also depends on who is analyzing the game because while one person might hate it, another may love it.

Which brings us back to the point of this article… if you’re sticking with SWTOR, why are you choosing to stay with the game? What do you love about SWTOR?

Some players have stated they see the game a bit like a single-player game with 8 different player options that gives you the option to play with others now and again. For some gamers, this is enough. They don’t need to have available groups at the snap of the finger. They want to enjoy the story and the game.

If you’re staying with SWTOR, what are some reasons why you like the game? Let’s fight the haters and share what we still love about the game.

What would make you happy to see in the future of SWTOR?