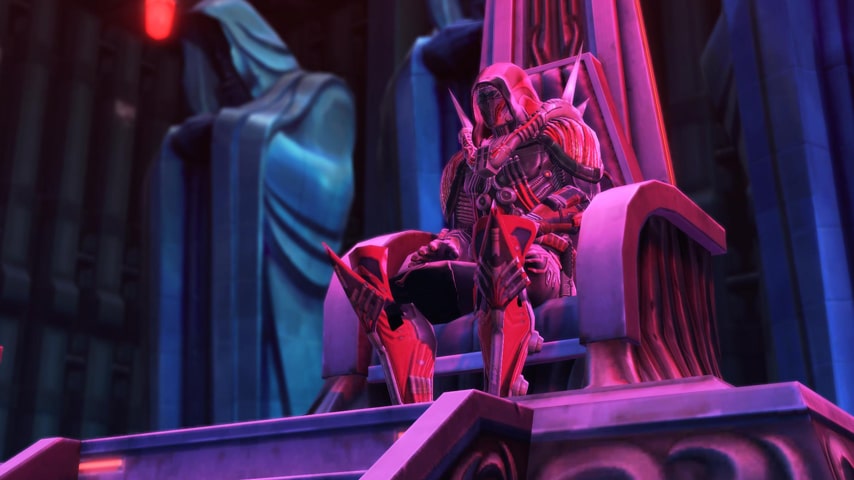 BioWare posted a new role play update ion the official SWTOR Website. Not sure who wrote it yet, but it is definitely worth a read. Check it out below:

The Imperial Guard stood at attention as Darth Lachris strode down the hall to the Dark Council Chamber. Red sand clung to her hair and robes, the color an intense contrast to the sterile walls of the Academy. She did not presume to know why her master had summoned her. Assumptions were dangerous, an acolyte’s move that she had long outgrown.

The door opened with a hiss. Darth Marr sat alone, still as the statues of dead Sith carved into Korriban’s bedrock. Upon reaching the middle of the room, Darth Lachris kneeled. Sweat ran down her back despite the cool air inside the chamber.

The cords and spikes of the armor encasing Darth Marr’s body gleamed in the chamber’s blue glow. He remained seated and silent, but she knew he was aware of her presence. Her master possessed the shape of a man, yet his voice was devoid of emotion, a human shell hollowed out to be filled by the Dark Side.

When he finally deigned to speak to her, the marrow within Lachris’s bones tingled. “Apprentice, tell me what you know of Lord Calypho.”

Well, this was a surprise. “Darth Thanaton’s former master? Only what you’ve told me — he was a fool.”

“A fool, yes, but one who served his purpose.” He motioned her to rise. “As you will serve yours.”

Darth Marr stood, his shadow fell across her. “Power must be earned. Lord Calypho failed to understand that and paid the price.”

“And just how do Calypho’s missteps involve me?” She kept her voice steady. A single moment of weakness and he would seize upon it.

Marr approached her with slow, deliberate steps, hands resting on the small of his back. Her master never rushed, always maintained an appearance of control. “I sense a similar hunger for power in you. Do not bother denying it.”

In an instant, he was gone. Her nostrils flared slightly as she tried to sense his presence.

“You believe you have earned that power, but you are mistaken,” his voice thundered behind her.

She did not flinch. Lachris had been Darth Marr’s apprentice long enough to know when he was testing her. He pulled out his holocom to display the Nevoota system and zoomed in to focus on a single planet.

“The Empire requires Balmorra pacified,” he explained. “The Resistance is growing due in part to Governor Melchiro’s bungling. What started as a simple annoyance has become a thorn in our side we can no longer ignore.”

Lachris was aware of the situation on Balmorra. Melchiro offered only excuses for his failures. He was a worm she’d like to watch writhe beneath her boot.

“You have shown promise, both in your training and on the battlefield,” Marr continued. “But I cannot just give you Balmorra.”

The flickering image of Balmorra vanished. “Of sorts. Which brings us back to Lord Calypho. Fool though he was, he taught one valuable lesson.”

Closing her eyes, Lachris searched her memories. Sith teachings whispered to her. Sifting through them, an uneasiness spread across her body. Bile stung the back of her throat, the further she delved into herself. Then she found it. “Foresight becomes clearest the closer you are to death.”

“You intend for me to experience a vision… of Balmorra.” She looked at his masked face and wondered if he was smiling. Did he even have lips left to smile or was it true that the Dark Side had ruined his features beyond human recognition?

Darth Marr lowered his hood. His right hand detached the lightsaber from his hip. “I will push you to the brink of death. You will tell me what you see. If you lie, I will know, and I shall no longer need an apprentice.”

“So be it,” she said and unsheathed her own lightsaber.

The rage, always waiting in the pit of her stomach, stirred. Heat washed over her limbs and heart, loosening them for battle. Darth Lachris did not hesitate. Lightning danced through the muscles in her arm to burst from her fingertips. Marr tilted his head to miss the purple bolts. The sight of him fueled her hatred.

She charged, lightsaber cutting the air above her. Lachris’s roar swallowed all sound in the chamber. Darth Marr held his ground, stalwart against her attacks. Circling her master, she dashed in and out, slashing, searching for an opening. He gave her none.

Lachris prepared for another assault. Arms outstretched, electricity rained down on Marr. One bolt struck his leg, causing a momentary twitch. Immeasurable joy drummed within her. The Dark Council member held out his left hand. Lachris heard the sound of her skull crack against the wall before she felt it.

The blow threatened to quell her rage, cut off her power. Lachris refused to give him the satisfaction. She grimaced and pushed herself to stand. “This isn’t over,” she snarled through clenched teeth.

Searing, white pain shot through her and melded with the hatred within, twisting it into something else. The life seeped from Lachris’s pores, cracks of lightning loud in her ears. Blood bubbled in scorched veins. Her vision went black.

With the darkness came relief. She filled her lungs with even breaths and willed her eyes to open.

His voice was both distant and close. “What do you see?”

Skulls. Hundreds upon thousands of skulls littered a muddy field. The soil was stained with blood. The air with smoke. A giggle of delight slipped through her lips. “Destruction, master.”

The smoke covering the field took shape, gathering the skulls to give them false life. The shadows played their parts – fighting, killing, dying – to create a single man. His fears and desires were etched into the dead men who fought for him.

“The Resistance’s leader,” Lachris murmured, “is a Republic soldier.”

The soldier born of smoke and skulls reached towards her. Lachris readied herself, but before the darkness could touch her, another shadow charged in, slicing through the soldier. The skulls fell and the smoke dissipated.

Lachris gasped. “There’s someone here. Someone powerful, but their face… it’s clouded.”

“Will the Republic soldier be a problem?” Her master asked again.

The field returned to ruin. Her shadowy savior gone. “No.”

Kneeling down, she plunged her fingers into the Balmorran soil. The core spoke to her through the dry roots. The power within the planet presented endless possibilities. Lachris had never known true happiness, but holding a planet’s beating heart in her fist… she couldn’t help but smile. “Balmorra will be mine.”

Lost in her passion, Lachris did not notice the smoke swirl around her. Two shadows towered over her, their features ever changing in the smoke. Lachris tried to pull her hands from the ground, but the roots latched onto her wrists, holding her in place. The end was swift. A splash of cold water and then nothingness.

She shivered on the Dark Council Chamber floor.

She need not answer. The chamber reeked of her fear, the stench permeated the walls. Darth Marr raised his right hand, bringing Lachris to her feet by her throat. She clawed at the Force tightening around her windpipe.

Did I fail? She wondered, retracing her steps through the vision. The memory was already hazy.

“You cannot escape death. Consider this my final lesson.” Darth Marr released his grip and she fell, gasping. “Only a coward runs from the inevitable. You are not a coward, my apprentice.” It was the only compliment she had ever received from him.

“You have done well. A shuttle awaits to take you to Sobrik. The Empire can no longer afford Melchiro’s incompetence. Relieve him of his duty.”

Darth Lachris watched him leave. Heart pounding as she considered her master’s words. The future was ever changing. There was still time to alter her fate.