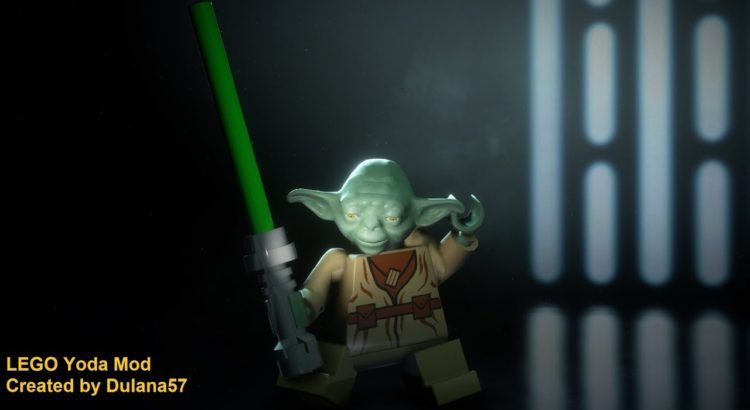 Tired of looking at an overly CGI-generated version of Yoda in Star Wars: Battlefront 2? Well, with the help of a mod by user Dulana57 on NexusMods you can change the character model for everyone’s favorite, green Jedi into a LEGO-style master of the Force.

While the mod is purely cosmetic and only for Yoda, it’s still a nifty creation for your mod collection. The character model is well-made, semi-naturally fits in with the SWBF2 world, and is fully animated as well.

On NexusMods this particular mod is titled “LEGO Yoda Mod”. It’s available for download and use now.

Mods can be a great way to breath new life into an aging game. There are a few decent ones available for Star Wars: Battlefront 2. It has been noted, however, that, due to developer restrictions, that it has been somewhat challenging for even the most dedicated modding champions to create interesting and compelling mods for SWBF2. Plus, being an almost exclusively-online title – mods aren’t as in demand for it. That said, make sure you’re playing offline when utilizing any mods unless you’re ready to take a ban like a champ!

It is pretty cool to see a LEGO version of Yoda flipping around and making quick, easy work of Stormtroopers in Battlefront 2, though. It’s a simple mod, but it’s entertaining nonetheless.

If Battlefront 2 is starting to lose its luster with you, don’t worry – Star Wars Jedi: Fallen Order came out a few days ago. It is a single-player-only title, though. So, if you’re wanting another online shooter, you’ll either have to wait for EA to announce Battlefront 3 or keep a lookout for more new content updates for SWBF2.

On a side note – there is a brand new LEGO Star Wars game on the horizon, too. LEGO Star Wars: The Skywalker Saga has been officially announced and will be available on Xbox One, PlayStation 4, Nintendo Switch, and PC sometime in 2020.