Star Wars Force Arena will receive its 1.5 update is comming closer.  This update will include some rather drastic changes, and since these changes are going to impact the game on every level, the devs did a preview for us to enjoy. Check out the details and let us know what you think below.

In the next update, we will be separating your ranking points by faction, rather than having them share a rating. We are hoping that this will allow players to unlock the other 50% of the game, as they can swap factions without risking their main ranking points.

We will be running some magical formulas to get you off on the right foot when the change happens. We will be taking your rating at the end of the season before the update, and using that to work out your rating points for each faction after the update. Your strongest faction will receive the exact same amount of ranking points as you finished with the season before.

Due to both sides being separated, you can get the season rewards for each faction separately. This also means that Squad Leaders who are Kyber for both factions, will receive bonus Crystals from both factions once the season ends.

Following from the separated rankings, after the next update your existing player level will be separated into Rebel Alliance Level and a Galactic Empire Level. Once the update goes live, you will have different account levels for each faction. This helps to alleviate some of the issues when playing your least favored faction, as you will be playing other players who will be a similar standing as you. Your turret levels will also be separated depending on your faction.

After the update, your levels will be dependent on the upgrades you have made for a particular faction. You may find that your Rebel Alliance Level is at level 6, whilst your Empire level is at level 12. This will help keep balance once the separated rankings have been implemented! Because we are changing to a faction based level, the required XP per level will be changed.

At the moment, all match results wager your Rating Points. This makes experimentation difficult because there is always a huge price to pay if it goes horribly wrong. Trying new cards, or trying to complete new missions could mean that you could drop multiple points and tiers. There were also many requests for a more casual mode due to the stress that players can get playing against players of a higher level.

Through many meetings, conversations and disagreements, we settled on the decision to separate the rules of the game modes in the upcoming update. The modes will be separated into Ranked Match and Normal Match. We had to maintain the 2 mode split to reduce fragmentation of the matchmaking pool. 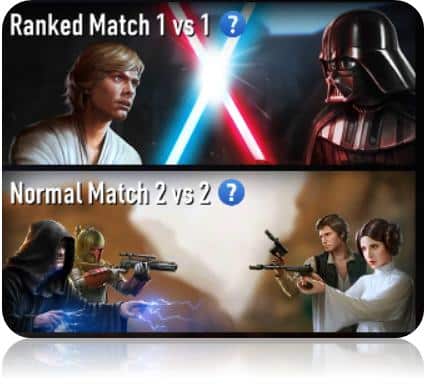 Ranked Match 1 vs 1:
Ranked Matches will be the game mode which can increase or drop your Rating Points. In the upcoming update, the existing 1 vs 1 mode will be changed to the Ranked Match.

Normal Match 2 vs 2:
Normal matches will be a more casual mode which does not increase or drop your rating points. In this mode, all players will be using the same card levels. In the upcoming update, the existing 2 vs 2 mode will be changed to be a Normal Match.

In Normal Matches, unlike friendly matches, you will be able to earn Credits and Card Pack rewards. Just like before, the rewards will be dependent on your Ranked Match rating points. For example, if a Squad Leader whose Galactic Empire is in Tier 6 wins a Normal Match for Empire, he will receive a Tier 6 Card pack.

Due to the rather drastic changes mentioned above, there will be some changes to the rewards that you are given.

Victory Packs and Credit Reward
These packs will be given based on each factions tier. Just like before, you will get the reward based off your opponents tier if you win against higher tier opponents.

As your ELO increases, the chance to fight against more challenging opponents also increases. Winning these games will see a large increase to your rating points increasing your rank further. We are also making adjustments to the Rating Points drop when you encounter opponents who is a way higher level than yourself.

We are also finally implementing the replay feature that many of you have requested! You can watch some of the best action from around the game in the Highlights section. This will show games from all across the world, from Durasteel to Kyber. Maybe you want to marvel at the dazzling displays of the top ranked Kyber Players, or maybe you want to see just how far you have climbed by watching lower level games. However you want to watch replays, you can do so here.

You can also share your own replays to your guild through the Battle Log menu. This will allow you to share your most intense games, show off some of those cool moves, or possibly work together with higher ranked players in your guild to improve your own gameplay!

There is more coming in the update than what is listed here, however things are still being prepared. We will be announcing additional details more thoroughly once we are ready to post the Update Notice before this goes live.

May the force be with you.