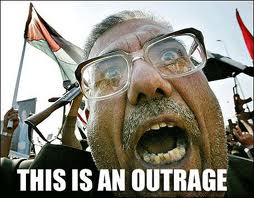 Ranked PvP Season 2 Rewards Announced, and the player base is outraged. Basically we will be getting the stuff we saw in on the public test servers – even after everyone said they were horrible. The rewards you will be getting:

(Based on your tier at the end of Season 2) 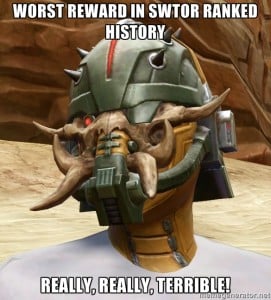 These rewards has coursed a shitstorm on the official forums, were players are calling it the worst reward in frogdog history. Personally I believe Bioware is dicked no matter what. It doesn’t matter what the rewards are, or what they say in response to the bitching. The same contingent of whiny entitled forumgoers are going to complain about it. Here is Alex response to the comunity:

Hey all,
I wanted to step in and give some answers to a few questions I’ve been seeing. Hopefully this helps clarify where we were coming from with the Season 2 rewards. The overwhelming feedback of Season 1 rewards was that “reskinned” items are not desirable. In Season 2, we wanted to give reward models that couldn’t be found in any other content channel, such as Deathmark’s Helmet which is a 100% unique model.
I’ve seen some questions about why we did not choose a 100% unique mount or full armor sets for the Season 2 rewards. Musco went into detail about this in an earlier post here. The TL;DR version is that because Season Rewards are one off items, it is unlikely you will see a 100% unique mount or armor set. That is not to say you will not see mounts in the future, we definitely want to make some really awesome looking mounts for you, but it will be more in the vein of Giradda’s Rancor mount in that it is a special skinned version rather than a completely new model.
We are going to take your feedback from this thread and others, chew on it, and make a better plan for Season 3 onward. Your feedback is truly important to us and the Suggestion Thread has already come up with some awesome ideas we are excited to put into the game.

Maby it would be more productive to offer suggestions of what they would want rather than complaining about what they hate. Which I guess is the point of the suggestion thread so maybe something will come out of that. Something tells me that what the pick for s3 won’t be good enough either though.