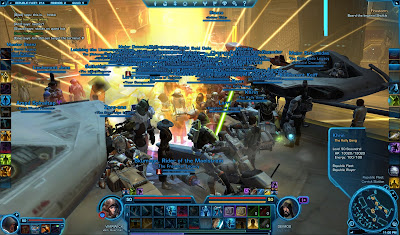 In a story at MarketWatch.com, we learn a bit of interesting news about SWTOR. It’s an article/interview about Electronic Arts’ CEO Riccitiello, 52, but contains a fun tidbit about the BioWare hit of the year- SWTOR.

According to the source:

In a Dec. 23 statement, EA boasted that “The Old Republic” had attracted more than 1 million registered subscribers in just three days on the market.

Doug Creutz of Cowen & Co. says that Riccitiello’s tenure as CEO has featured misfires along with its successes but that “Star Wars” may represent his biggest bet of all, considering both the purchase price of BioWare/Pandemic and the development costs poured into the game since then.

“I think it’s safe to say that the total all-in investment in ‘Star Wars’ is probably approaching half a billion dollars,” Creutz says. “EA has minimized its risks as much as it can on this bet, but it’s still a risky bet. To the extent that any one game defines his tenure, it’s going to be how ‘Star Wars’ performs.”

If this is accurate, that is absolutely insane!

Half a billion dollars? That is simply an enormous amount of money for a video game, even for a large publisher like EA. Does dumping a lot of money into a game guarantee success? Definitely not! We’ve seen this as a prime example in other forms of media as well- such as the movie industry. However, it does mean that EA has a great deal riding on the success of this game.

With such a huge investment amount, they are indebted to finding success and this includes making the gamers happy so they continue to buy and pay to play the game. Happy gamers means profit for EA.