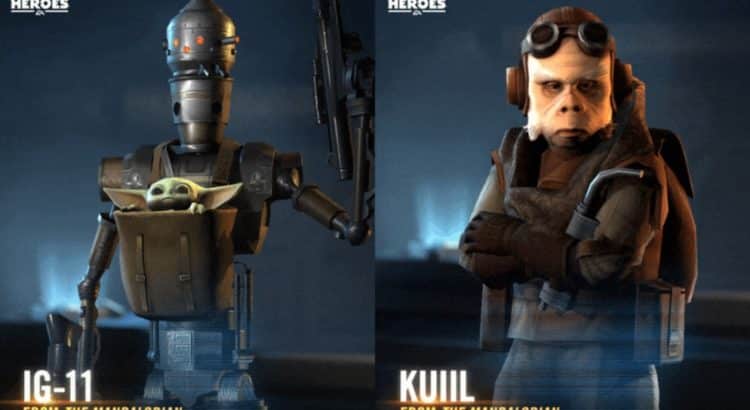 They guys over at Capital Games are incredibly excited for the next season of The Mandalorian that started last week, and even more excited to bring you the next set of characters from the show! The first two characters from this side of the galaxy are Kuiil and IG-11, and IG-11 has a very special package he’s caring for.

One of the Galaxy’s most mechanically-inclined and surly Ugnaughts is making his way to the holotables! After years of Imperial servitude, Kuiil had hoped to find solace on Arvala-7 but fate came calling with other plans. Soon Kuiil found himself rescuing a Mandalorian, reprogramming a menacing IG unit, and protecting an adorable, tiny green creature.

Kuiil’s Special Ability, “I Have Spoken,” introduces the new “Mechanic’s Savvy” buff, which is tailored to work especially well with Scoundrels and Droids. Scoundrels will benefit from increased Critical damage perks, while Droids receive increased Offense and revive capabilities. One Droid in particular, IG-11, will help Kuiil during battle by ensuring the Ugnaught can’t be Critically Hit or Stunned when they’re in the same squad.

Also joining the Holotables is IG-11, the former assassin droid-turned-nurse! As a nanny who takes “tough love” to new levels, IG-11 is a steadfast protector of The Child and trusted colleague to Kuiil. In addition to having a pack filled with ridiculously cute cargo, IG-11 brings some nursing skills to battle by healing up his allies mid-battle. He also serves as a protector by Taunting and stealing the enemy’s health to keep his allies safe. IG-11 adds even more utility to Scoundrels and Droids, as he assists during enemy’s turns and dispels Debuffs.

If you want to know more about these two characters, Capital Games hosted a roundtable discussion with the Character Designers and several Community members. You can find a video of the discussion here on Operation Metaverse, a podcast from Galactic War Report or check out the SWGoH Events to see a write up of the discussion.

Both Kuiil and IG-11 will be initially available in a special set of Galactic Challenges as opposed to our regular Marquee format. These events are In November, each character will have two special Galactic Challenges on Nevarro where you will use your Droids and Bounty Hunters to unlock 40-60 shards total for each character from their 2 events. The shards are unlocked by completing the first 2-3 tiers of each Galactic Challenge so you won’t need to worry if you can’t complete the Feats.

Galaxy of Heroes 5th Anniversary:
We are celebrating the game’s 5th Anniversary next month! I can’t believe it has been 5 years since Capital Games launched with just over 60 characters, and now We are up to 240 (and still growing!). The Anniversary is a great moment for us to look back at how the game has evolved, but the developers also have some announcements regarding changes coming to Galactic Challenges. Stay tuned for next month’s Road Ahead.