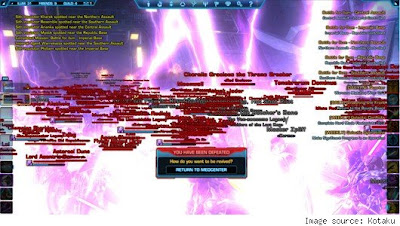 While some were celebrating the new patch today (SWTOR Patch 1.1), others were frustratingly being farmed on Ilum as they attempted to complete daily and weekly PvP quests. What resulted was a bit of a disaster if you’re on the wrong side. And even if you weren’t, it created some pretty severe system load from all of those people in one area.
“”We’re currently investigating potential issues related to the Ilum open world PvP area post-1.1. We understand that this is a topic of much discussion and we ask that you please direct all discussions to this thread,” writes Joveth Gonzalez on the official SWTOR forums.
He also reminds everyone of the forum rules when posting on this issue:

“As always, we ask that the community keep the following things on mind when responding:

It’s easy to see why they would need these reminders because this situation is nothing short of a disaster.
The situation was pretty ugly today, especially those on servers with a big faction imbalance between the sides. The devs have adjusted both the daily and weekly missions so that killing factional enemies are required and that PvP currency reward is higher for doing so. This means there is a great deal of incentive to kill the other side and with the current imbalance in the factions, it’s a farm-fest.

BioWare jumped in to release an official statement on the issues in the SWTOR official forums:
Hello everyone; I wanted to update you on the issues we’ve been seeing today on the live servers, specifically within the Open World PvP area on Ilum. We’re aware that on some servers, either Republic or Empire groups have been capturing the Ilum control points, entering the enemy’s base and ‘camping’ the medcenters, preventing the opposite faction from leaving their base to recapture control points. This is not a fair or balanced gameplay experience and can also severely affect client performance, so we’re taking steps to address this.

Our intended design for Ilum Open World PvP is that players are instantly killed when entering the enemy’s base safe area, just like in Warzones, and that the defending faction can take taxis to other points within the zone. As of Game Update 1.1, this is not working as intended. We have found the issue preventing this from happening under server load and will be publishing an Emergency Patch to address the issue. We’re aiming to have this patch published early tomorrow morning (January 19th, 5 AM US CST).

In addition to these changes, we’ll be reducing the population cap on Ilum. This should help increase performance by requiring your client to render fewer characters on-screen at once.

Regarding Valor gains, with the 1.1 update, players now receive a base reward of 20 Valor per unique enemy player defeated in a short time, and this base reward is modified by the number of objectives that the player’s faction owns. The gains are rate limited per player killed, encouraging players to attack unique players, not to pursue vendettas. The Valor gains players can see over time will vary greatly depending on the activity level in the zone. This is expected.

To dispel a couple of rumors that have been seen today – there is no Valor gain from destroying turrets within enemy bases, and none from killing NPCs.

We encourage players to avoid Ilum until our patch is deployed. As a temporary measure we will be disabling taxi services which would normally take players into the Open World PvP area. However, players will still be able to taxi out of the area.

We will continue to monitor Ilum across all servers and will make further changes to gameplay if required. We welcome your feedback here on the Forums, but please ensure your feedback is constructive and specific. Feedback based on rumor does not help us isolate potential issues. – Gabe Amatangelo