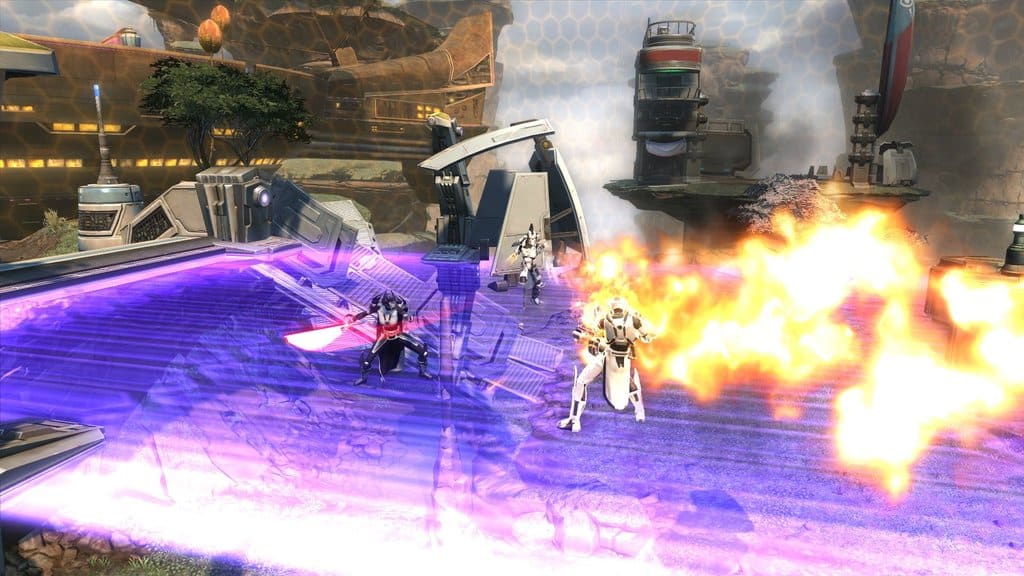 SWTOR game update 2.4 is coming in the fall and it’s adding arenas to the game that features the small-scale 4v4 battles. Not all the details are known at this time but we do know that it is an addition to the current Warzones, and adds a new competitive element to PvP in SWTOR. Therefore, it will give players more PvP action after leveling up than you have now. While this is certainly a good thing and many SWTOR players are very excited about this new update, others are not so happy. (No surprise, right?)

Adding arenas to The Old Republic has both good and bad points to consider. Based on other MMOs, here are some of the ways adding arenas to SWTOR could affect gameplay.

Some Players May Have an Advantage

Some players are concerned that adding the arenas will give others players more of an advantage. There has been much debate on how some classes have an advantage over others and when you have smaller scale battles like the 2.4 update will add, the issue of balance between the classes becomes more evident. It’s the age old argument of MMORPGs- class balance and PvP fairness.

When you’re in a large battle, it’s not as noticeable because there are so many different characters that the strengths and weaknesses balance out between the groups of players. However, when you reduce the number of characters doing battle, the difference becomes much more noticeable. Many players are concerned they may not have a chance at winning the battles, when facing opponents that have the advantage. How do we keep an even playing field?

Current Problems May Be Put On Hold

Another concern many gamers have is that players will begin to complain about the balance issues to the point that the developers will have to focus their attention on correcting this problem. When this happens, other concerns such as problems with PVE will be put on hold for a while, so the developers can concentrate on how to create more balance for the classes. For some players, this may seem like a good thing because their complaints are being addressed. On the other hand, other gamers may feel like this is not fair because solutions to problems they have been waiting for may now take even longer to correct.

Will new warzones take away valuable Bioware resources that could be used on other parts of the game?

Current Warzones Could Be Affected

Anyone familiar with MMOs has to wonder how introducing arenas into SWTOR will affect the current warzones. If history repeats itself as it often does, there is a good chance that the current warzones will turn into something players feel like they have to do in order to advance their character enough to participate in the arena battles. If this happens, it will be more like grinding and less fun and exciting for everyone than it is now. It could take the thrill out of warzone battles.

Will arenas turn the current warzones into a chore?

One of the things that many players are looking forward to is the competition. Arena battles are much more competitive due to the small numbers and that is something that brings new life to game. When you’re doing battle in an arena, you have to put forth your best efforts to win. Every individual player shines (or fails). You can’t depend on teammates to do the job and get you through and many players are very excited about having the opportunity to show off their individual talent.

It Will Attract More Players

Game Update 2.4 will most likely attract more players to the game and rejuvenate interest in SWTOR which is always a good thing. This will help the population to grow larger and it will make the game even more competitive as new players join just to show their battle skills. It could have a big impact on gameplay and just the game in general.

How do you feel about SWTOR added arenas to the game? Are you excited about the new update?