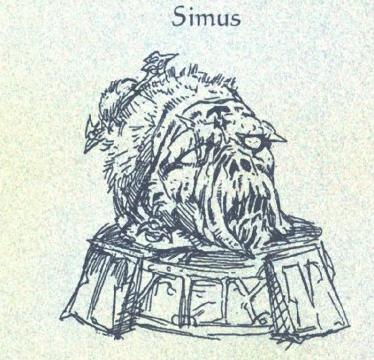 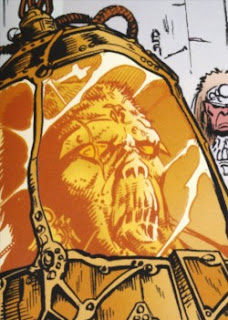 Simus was a Sith Lord who lived during the first Sith Empire. Around a century before the Great Hyperspace War of 5,000 BBY, Simus dueled fellow Sith Lord Marka Ragnos for the title of Dark Lord of the Sith and total control of the Sith Empire. Ragnos defeated Simus, who had been beheaded in the battle with the other aspiring Dark Lord. However, Simus did not give up. Rather than letting himself die, he used his ancient Sith powers to preserve his life. However, very little of him was left; he lived as a severed head in a special jar for the rest of his days. He was carried around by heavily-armed, hulking Sith servants, and joined the Sith Council. He became a respected member of the council, and his opinion was highly valued by the other Sith on the Council.

He lived for over a hundred years, and watched as Marka Ragnos grew in power, and pitted his adversaries against each other, ensuring that there were no threats to his throne. Simus was one of few to survive, and in the process trained Naga Sadow in the ways of the Sith. Sadow eventually became extremely powerful, and after the death of Marka Ragnos, Sadow was one of two challengers for the throne. The other, Ludo Kressh, wished to keep the Empire hidden from the Galactic Republic, while Sadow wished to expand the Empire’s borders. Though the Council were split on the matter, Simus supported his old friend Sadow, and backed his candidacy for the role of Dark Lord of the Sith.

Simus was eventually killed by his apprentice, after witnessing Sadow sabotage a Sith prison and release two prisoners from Koros who had stumbled upon the Empire, in an attempt to frame the attack on the Republic. Simus asked his apprentice what was happening, but he never got an answer. Sadow killed the dismembered Lord with a Republic issue blaster. The other Sith on the Council, oblivious to the actions of Sadow, deeply mourned old Simus’s death.

Simus was created by Star Wars author Kevin J. Anderson for third issue of the Golden Age of the Sith sub-series, part of the Tales of the Jedi comic series. He was penciled by Dario Carrasco, Jr. and colored by Perry McNamee for the comic.

Biography
Simus was born some several centuries before the Great Hyperspace War, five thousand years before the Battle of Yavin. Like every sentient being in the Sith Empire at the time, he had at least some blood of the Sith species. He grew in power and prominence eventually became one of the most powerful Sith Lords of his time. After the death of the Dark Lord of the Sith, Simus and another powerful Sith. Marka Ragnos was the challenger. A Sith hybrid of immense physical strength, Ragnos became infamous through a series of short, ruthless campaigns against any and all who stood in his way of his efforts to gain power. Ragnos and Simus eventually dueled each other for the right to rule the Sith Empire and for the mantle of Dark Lord of the Sith. Simus lost the duel: Ragnos cut him down, and he was left scarred and headless. Yet Simus did not give up. Using ancient Sith techniques, he kept himself alive, preserving his head in a specialized crystalline container. The bulky container was made of metal, with transparent orange material around Simus’s head, allowing him to see those that he spoke with, while they could some his gruesome, dismembered head. A massive Sith servant, armed to the teeth, accompanied Simus everywhere he went, and carried his jar when he needed to move somewhere else.

Sith Council
Simus was eventually offered a place on the Sith Council, alongside such other members as Dor Gal-ram, Horak-mul, Shar Dakhan, Garu and Tritos Nal. He watched as Ragnos gained complete control of the hundreds of worlds of the Sith Empire. Ragnos had many who might have opposed his reign assassinated, though Simus managed to escape such a fate, and for one thousand years served on the Council, becoming one of the most respected members. He took at least one apprentice, a Human-Sith hybrid known as Naga Sadow. Sadow became extremely powerful, and when Ragnos passed away in 5,000 BBY, Sadow was one of two lords bidding for his throne. Similarly to how Ragnos and Simus dueled centuries before, Naga Sadow and Ludo Kressh engaged each other in a duel. Simus and several other of the Council members supported Sadow, who wanted to expand the borders of the Empire and attack the Republic, while Kressh wished to remain hidden from the Republic and the Jedi Order, who had cast out his ancestors over a thousand years previously. The two aspiring Lords had a great duel during Ragnos’s funeral, and were closely matched when Ragnos’s spirit appeared, telling them that though this was the Sith’s golden age, things may have changed soon, and told the two Sith to choose that their paths wisely. Just after Simus’s former rival departed once again, a ship, known as the Starbreaker 12, arrived on Korriban. Two hyperspace explorers, named Jori and Gav Daragon, had inadvertently landed on the mausoleum planet after typing in random co-ordinates. Fearing that this was the possible attack from the Republic that Ragnos warned about, the Sith Council had them immediately imprisoned and called a Council meeting.

Death
The dozen or so members of the Sith Council, including Simus, Sadow and Kressh, held a meeting on the ice planet of Ziost, where the Dark Lord of the Sith normally ruled from—however, a new Dark Lord had yet to be decided. One of the Councilors quickly claimed that the two Humans were spies, sent by the Republic, and if they allowed them to escape, they would return with their forces to plunder all that the Sith had worked hard to build. Kressh and his conservative faction were of the opinion that they should kill the two explorers and remove all evidence that they were ever on the planet. Simus, however, boldly Kressh that he was speaking from fear, and was not thinking about the situation, which could have ended up dire. Simus then told them that this was an oppurtunity—one they should consider before destroying it forever. Sadow was quick to side with his old master, and told Kressh that he was not adapting his thinking to the adapting world they lived in‐that he was still living in the past, in the times of Marka Ragnos, and that he was afraid of change.

Yet Kressh persisted, saying that if Simus was wrong, they would lose everything, while if Kressh was wrong, they would lose but the lives of two worthless Humans. Sadow responded angrily, banging the table with his gauntleted hands. He told the members of the Council, including his old master Simus, that if they killed the two explorers they would lose the chance to capture thousands of new worlds, steal the riches from as many species and gain control of the whole galaxy. Looking at Simus, Naga Sadow told the others that it was their destiny. However, many members of the Council did not share Sadow’s optimism, and eventually, they decided that Jori and Gav Daragon posed too great a threat to their Empire. They decided to execute the Humans as soon as possible; they would talk about what they would do to the ship at the next meeting. Simus was tasked with telling the two youths of their fate, and accompanied by his loyal bodyguard, he traveled to their cell on cold Ziost. The guard lifted his container up to the bars of the tiny cell and Simus told them what would happen, and why. Gav protested, telling him they hadn’t even given evidence, but Simus replied that their information was irrelevant to the Council.

However, Sadow was determined to see out his plan, and behind the other Councilor’s backs he had a tracer placed in the Daragon’s ship. He even kept his plan secret from Simus, as if it was to work, no-one could get in the way. Using a Republic blaster found on the Starbreaker 12, Sadow and his loyal Massassi raided the cell block where Jori and Gav were imprisoned on Ziost, killing anyone who got in the way. After routing all who opposed them, Sadow’s Massassi escaped with Jori and Gav, whom Sadow had become allies with. As Sadow stood alone in the corridor, surrounded by corpses, Simus and his slave arrived. The beheaded Sith was concerned for Sadow’s well being, believing, like the other Councilors would in time, that it had been a Republic raid. Sadow turned towards his master, and told him he was sorry. He then fired at Simus and the slave with the blaster, killing the old Sith.

Legacy
Simus’s head was eventually found by the Council, who mourned Simus’s death, angry that someone would kill such a helpless opponent. They declared the “Republic agents” monsters for having slain old Simus, whom they all had great respect for, even those who did not support his ideas. Sadow then burst in, pretending to be oblivious to the goings on. The ancient Sith’s eulogy was a speech delivered by Naga Sadow over Simus’s wisdom and nobility. Ironically, Simus’s death sparked the same opportunities he had supported. Sadow eventually defeated Kressh, and allowed Jori to escape back to the Republic with the tracker in place. Sadow waged a devastating war on the Republic, known as the Great Hyperspace War, however he was eventually defeated and fled back to the Empire, where he once again faced Ludo Kressh, who had survived the previous battle. Sadow managed to kill Kressh this time, and fled to the moon of Yavin 4, where he warped his loyal Massassi to keep himself alive. Ultimately, Sadow’s plans brought about the Fall of the Sith Empire, and for one thousand years the Sith would cease to exist, until Marka Ragnos’s spirit once again materialized.