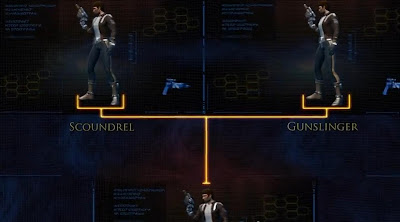 BioWare was late with the updates yesterday. witch means us Europeans don’t get to see it before the day after, but it was worth waiting for.

This weeks update comes fully loaded with the Smuggler Progression Video, Pax Highlight, and a Developer Blog from senior writer Alexander Freed. The developer blog gives us a good look at what goes into creating relevant stories and characters for the game and comics/novels alike. There’s also a few good tips in there for anyone looking to take a shot at creating their own story in the Old Republic universe.

Here is a snip:

“The first thing that any potential tie-in to Star Wars™ and The Old Republic should do is answer a series of questions: What does this story contribute to mythology of The Old Republic? What does a reader get from this story that changes the way he or she experiences the game? Does it give the reader a new perspective on a character? Does it explain a mystery that isn’t resolved in the game? Does it explore the setting and the timeline in new depth?

Once you are able to answer those questions, you’ve got a good starting point to create a story that’s worth the valuable time of an both Old Republic fans as well as the larger community of Star Wars™ fans.”

The Smuggler Progression Video is just awesome. Check it out below:

As your character progresses through the saga of Star Wars™: The Old Republic™, you will see them advance as you unlock new skills and acquire or craft superior gear.

Whether running blockades to deliver vital supplies or evading Imperial patrols, the Smuggler must rely on his wit and guile just as much as the blaster at his side. As the price on his head rises and his enemies grow more dangerous, the Smuggler will have to acquire new skills and utilize more powerful weapons and armor to survive.

Get a look at some of the ways the Smuggler can progress and see just a small fraction of the weapons, armor and abilities that become available to him.

And here is the Pax Highlight: