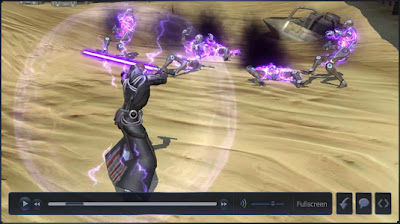 Yesterdays Friday update brought us the last remaining character progression video, featuring the Sith Inquisitor. This is kind of a historic update, as it is the last update before early access begins.

As you progress in Star Wars™: The Old Republic™, your character will acquire new skills and abilities that complement their more powerful weapons and armor.

Feared across the galaxy for both their mastery of the Dark Side of the Force™ and their ability to manipulate those around them, even those within the Empire know to watch themselves when in the presence of a Sith Inquisitor. Some acolytes who complete the trials use their newfound powers to channel the Force into devastating mental and lightning attacks. Others command the Force to deceive their enemies both in conversation and on the battlefield.