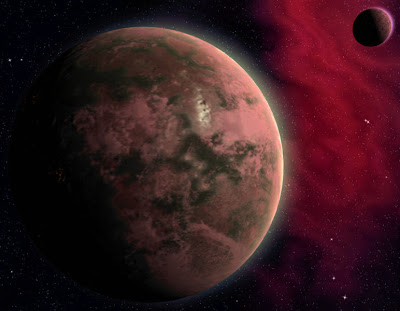 Nal Hutta (Glorious Jewel in Huttese) was the capital of Hutt Space and was located in the Y’Toub system. It was formerly known as Evocar and was the original home world of the Evocii, who were ousted by the Hutts in 15,000 BBY, who migrated from their original home world of Varl along with their servants the t’landa Til. It was sometimes referred to simply as Hutta at around 4000-3000 BBY. The planet was controlled by the ancient ruling Hutt families, who also ruled its moon Nar Shaddaa from Nal Hutta.

Geography and Culture
Nal Hutta, or as it was originally known, Evocar, was a very large planet, however it lacked natural heavy metals meaning its density was less than that of most worlds. The planet was originally a lush jungle world, though the Hutts eventually transformed it into a polluted and barren wasteland.

Once it became known as Nal Hutta, much of the surface became covered by flat, marshy bogs, stagnant, muddy puddles and patches of sickly marsh grass inhabited by insects and spiders. The atmosphere was also polluted by strip-mining operations and heavy industrialization, and a greasy rain drizzled down on the surface, although not to the extent of Dagobah. Raw materials were constantly strip-mined from the planet’s surface and shipped to Nar Shaddaa for processing and export.

The capital city, Bilbousa and the Guarja Shipyards were located on the planet.

The huttese translation of Nal Hutta into Glorious Jewel stemmed from the nearby massive, radioactive gas cloud, which contained the planet Ganath.

The planet was ruled by the oldest Hutt families, known as the Clans of the Ancients, who watched over the activities of both Nal Hutta and Nar Shaddaa from their homes. 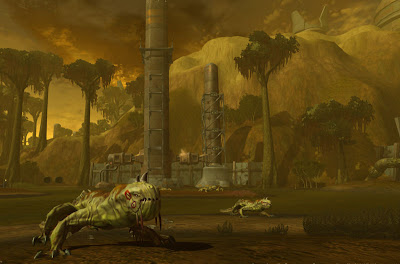 Hutt Empire
Centuries before they ousted the Evocii, the Hutts owned a small province on Evocar. Due likely to their legendary greed, the Hutt’s ownership of Evocar continued to grow through business deals where they traded their technology with the relatively primitive Evocii for portions of land.

Old Republic
In 15,000 BBY the Evocii realized their mistake too late, and following the destruction of the Hutt home-world of Varl, the Hutts took ownership of what was their’s on Evocar, becoming rulers of the planet, and renaming it to Nal Hutta. Having decided years before that Evocar was a suitable home, the Hutts exploited the Evocii during the technology trades, and had completely bought out the planet from beneath the Evocii. Hutt palaces, amusement parks and other constructions were built all over Evocar, and the Evocii could do nothing about it. The Hutts destroyed the planet’s lush mountainous rainforests, terraforming the planet into what they considered paradise.

The Evocii appealed to the Galactic Republic, however the contracts signed were legally binding, and the Republic ruled in favor of the Hutts. The Evocii were eventually evicted by the Hutts, and relocated to the planet’s fifth moon, which would later be known as Nar Shaddaa, The Smuggler’s Moon. The Hutts then destroyed the remaining Evocii agriculture and whatever was left of the original terrain and then terraformed any (destroyed) remaining patches of land. 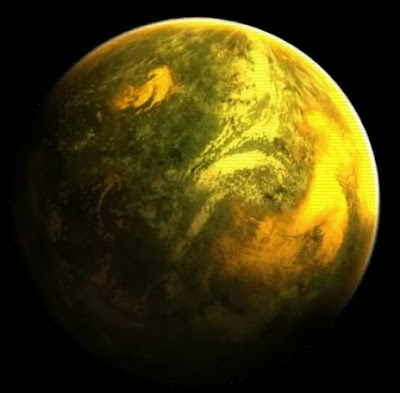 Hutta at the time of the Great Galactic War

When the Evocii were evicted to Nar Shaddaa they were enslaved to build the cities of the moon. Although the Vertical City was only starting to be built, it quickly began to prosper along with Nal Hutta. Five centuries later the entire moon was urbanized and the Evocii were freed of their labor by the Hutts. The Evocii were cast out into the Nar Shaddaa’s under-city and began to mutate into savages due to various technologies practiced on the moon.

Nal Hutta and its moon became havens for smugglers, pirates, and other criminals. At that time Nar Shaddaa rivaled Coruscant as the hub of interstellar trade. However the Hutts did side with the Honorable Union of Desevro & Tion during the same year when the the trade lanes shifted.

During the Dark Wars in 3,951 BBY, Nal Hutta was enslaving refugees after buying them from the Exchange in the Refugee Sector on Nar Shaddaa.

Great Galactic War
During the Great Galactic War beginning in 3,681 BBY between the Sith Empire and the Galactic Republic, the Hutts managed to remain neutral, ensuring their world remained exactly as they liked it.