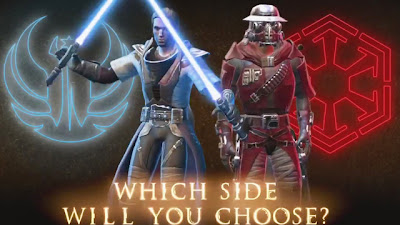 “This is the last one before your posts go back to normal right?”
“Yep!” I was excited to finish this last article, new ideas, the podcast, so much to do.
“Did you figure out a name for the podcast?”
I nodded. “Not a pun like Kai wanted, but still good. Galactic Transmission.”

As stated there is a lot to do. Just a few reminders before we begin as always, this is a simple review and the classes can change greatly towards the end of their levels. Tomorrow a video of myself and a few friends killing the SD-01 boss with commentary, and strategy will be up. Finally I would like to welcome my good friend and my brother Curoar to the podcast team. Next week I’ll have our first live show of Galactic Transmission, on Friday. Without further ado, the Bounty Hunter and Jedi Knight.

Story:
I highly enjoyed the Bounty Hunter story a lot. You start as a mercenary looking to participate in The Great Hunt, an intergalactic bounty hunting contest. But anyone can join, you need a sponsor, which is why you’re on Hutta. To find one to put you up. You meet a few friends, and make a ton of enemies in the process.

I loved the voice acting as a female bounty hunter. I was rough, tough, and not gonna take crap from anyone. I wasn’t exactly evil either. I didn’t not like making bad choices, but money is money and I wanted to make it. These choices were probably the most believable out of any of the classes alignment choices.

Combat:
I ended up grabbing Mercenary as my advanced class, the dual wielding, damage dealing healing monstrosity. Now the mercenary’s biggest difference between the Power-tech is the change in resource system. When they heal other targets they get buffs, that increase how much healing they do. Once they reach a certain amount they can expended it to improve an ability. While their healing is different than the other 2 healing Advanced classes, they still have stable abilities.

I enjoyed the Mercenary a lot more than I did the Vanguard (or Power-tech), mostly because of the amount of AoE damage the mercenary can do. In PvP the Mercenary was a power house and I was almost always on top of the damage done list. Questing went by rather quickly, mostly due to the ability of wiping out enemies before they can even retaliate.

Companion:
Your first companion as a Bounty Hunter is Mako. I love Mako. Maybe it’s the anime geek in me, but something about her just makes me smile. Probably due to her good hearted nature even though she’s in it for the money. She is probably the only female starting companion I didn’t want to back hand as I played through.

In combat she’s a healer, but also slight damage dealer. She’s probably the most unique companion, since she can fuill both roles. She’s also the only healing companion you get at the beginning of the game, making a bounty hunter almost invaluable for early level dungeons if you can’t find a healer.

Story:
The Jedi Knight’s story is the one I liked the least. It’s not a bad story, I just felt too damn heroic. You start off from the beginning saving people and taking things into your own hands. You get to Tython and instantly find enemy force users starting a muck on Tython. Your sent to go fix a lot of problems with natives and trying to figure out what’s going on.

The voice acting fits the heroic story line as a Jedi Knight. I ended actually went away from my goody two shoes ways and made my Knight a cocky evil bastard. The choices were very simple, and straight forward. Kill the guy, or teach him the errors of his way. From what I’m, told the story evolves into a much greater one but starts off very slow.

Combat:
Exactly like the Sith Warrior, I felt too strong for the enemies I faced. I grabbed Jedi Sentinel, the dual wielding dps class. A lot of your abilities are replaced when you pick your class, like your force leap, is a new ability that attacks with both weapons. The Sentinel surprisingly deals a lot of elemental damage with their abilities making heavy armor not that big of a deal for them.

In PvP I would take a Sentinel over a guardian for dps every time. If you remember my article on the Sith Juggernaut, I complained about not being able to slow my opponents. The Sentinel, or Marauder for the sith, have access to a few slows making it hard for enemies to escape them.

Companion:
Your first companion is T7-01. T7 is probably the companion who has seen the most out of the companions so far. He was in the deceived, and return trailers. He’s a rather old droid who has had more owners than most droids. He’s spunky and has an attitude, that reminds you of a rather small dog. I loved T7 as character reminding me of T3 from Knights of the Old Republic.

In combat T7 is a tiny monster that can deal a lot of damage. While having the ability to deal a lot of damage he uses heavy armor, and has a couple of tanking abilities. Don’t expect him to tank the entirety of a boss, but if something goes a miss for a second he can quickly switch for someone else. All in all T7 is an interesting little droid that I hope will serve most Knights well.