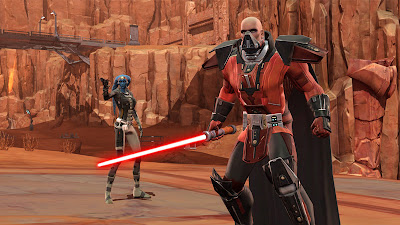 It’s Friday again and that means its time for another BioWare update for Star Wars: The Old Republic. Most of what this Friday update brings has already been revealed over the last day by other sites (particularly IGN and GameSpot), but it’s nice the see on the official site regardless. And with a few new snippets here and there (such as a new biography page).

This week’s update is all about those lovable little companions players will get symbolic of the Han and Chewie relationship. If you want to know how these companions will help your character develop there is a whole wealth of information now available on the Companions page.

Every Star Wars™ hero needs a companion. Han has Chewie, Luke has R2-D2 — even Jabba has the cackling monkey lizard Salacious B. Crumb. These characters will complement your strengths or weaknesses, and provide company for the epic journey you will inevitably undertake. Whether they’re combative, friendly, flirtatious, or even just good for a laugh, they always contribute to your development and serve as a sounding board for your choices. In Star Wars™: The Old Republic™, a variety of these Companion Characters will join your cause.

Learn more about Companion Characters and how they can shape and enhance your game play by visiting the Game Systems section! 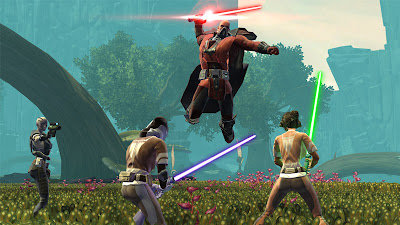 Wondering how you will be able to customize the Sith Warrior to fit your specific play style? We are excited to confirm the two Advanced Classes for the Sith Warrior: The Juggernaut and the Marauder! Whether you want to charge into the fray as a Juggernaut, punishing your adversaries while protecting your allies, or slice through enemy ranks with two Lightsabers and unmatched aggression, the Advanced Classes system in Star Wars™: The Old Republic™ will give you the power to match your play style.

In conjunction with the Companion Character section released today, we present you with one of the Sith Warrior’s Companions – Vette! You can learn more about this known associate on the Sith Warrior page or by accessing Vette’s biography.

Check out the newly updated HoloNet to get details about the Advanced Classes available to the Sith Warrior. Also be sure to visit the media section for a new video featuring the Sith Warrior as well as some screenshots showing the Juggernaut and Marauder in action!

What connects the two updates is a new biography entry, that of the Sith Warrior’s Companion character Vette. Here’s the description from her HoloNet entry:

Few people have seen as much of the galaxy as Vette and few have had as little control of their destiny. Born a slave on the occupied world of Ryloth, Vette was separated from her family at an early age and sold to a series of minor crime lords. When legendary pirate lord Nok Drayen utterly destroyed her latest owner’s holdings, Vette and the other slaves were given their choice of freedom or joining up with Nok. Vette became a pirate, travelling the known worlds and learning to get in and out of places she wasn’t allowed.

Years later Nok Drayen mysteriously and suddenly released all of his people from service. Vette was left on Nar Shaddaa where she joined up with other young, idealistic Twi’leks and used her criminal abilities to rob and ruin those who exploited Ryloth’s cultural artifacts and people. An unquenchable spark, Vette is older than her years but far from mature, delighting in silly pranks and always ready to laugh at people who think too much of themselves.