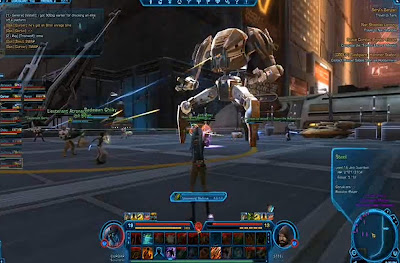 Welcome to “the great hunt”. Our new column here at SWTOR strategies, were we will talk strategies for each world boss in the game. My name is Zexu and I’ll be running through how to defeat every world boss on the Galactic republic worlds. Today we’ll be going over SD-01, a large droid found on Corusant. This footage was taken during the November 25th weekend beta test, so SD-01’s abilities may have changed.

This encounter was completed with ten players at levels 16 through 20. We used two tanks (Jedi Shadow and Jedi Guardian), three healers(Scoundrel, Sage and Commando) and five DPS.

Let’s go over his abilities.
SD-01 has two abilities. The first ability is applied to the highest threat target IE your tank. The stack increases how much damage the tank takes. It stacks up to ten times making your tank un-healable. To combat this simply have an off tank swap at four or five stacks. When the other tank has four or five stacks simply taunt SD-01 back to the main tank.

Quick trick: After the initial swaps your de-buff will fade equivalent to the time it takes for your taunt to come off cool down, so use that as a reference when to swap.

SD-01’s second ability is Proximity Laser. SD-01 will target two people randomly in your operation group. During that time they will take damage. The damage is increased the closer they are to each other.

Let’s talk strategy!
Begin by having your main tank pull the boss, with healers ready to start healing, and have your off tank ready to taunt. Have your operation group spread out so that they can easily move away from each other if they are targeted by Proximity Laser.

Allow your tanks a few seconds to build threat, pulling threat early on can be a quick wipe to the operation. Once threat has been establish have your DPS go all out on the giant droid. Make sure that everyone is using medpacs to help healers since their resources are limited this early in the game. Taunt at the correct intervals of time and you’ll easily be able to defeat SD-01. DPS must be quick because SD-01 has an eight minute enrage timer!

We’d like to thank Curoar, Dietcokke, Gorluc, Steel, Zoidberg, Scallion, Chiiky, Alcorn, Raneh and Atronach of the Tarro Blood server for helping us this weekend with the SD-01 Encounter!

Good luck with your encounter, and tune into Swtortrategies.com and Galactic Transmission for more strategies on operation bosses, and the latest Star Wars: The Old Republic news!