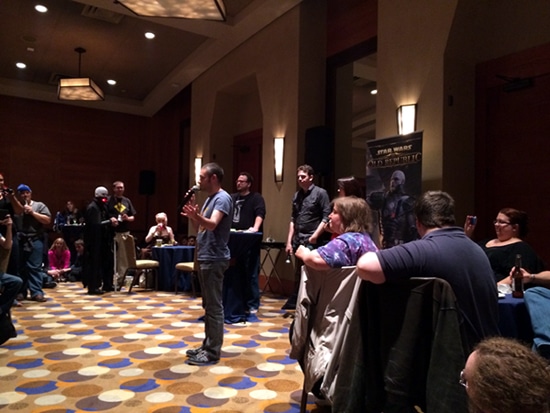 SWToRStrategies.com had the opportunity to attend Bioware’s SWToR Cantina Tour at Seattle’s Grand Hyatt hotel yesterday (Aug.31,2014) and bring you the latest information from the meeting.

The event was well-organized with free food and drinks, that certainly contributed to the already-relaxed atmosphere for the (about)100 fans who attended it. SWToR’s community manager, Eric Musco, made the introductions and highlighted the importance of Cantina Tours to Bioware as a vehicle for them to receive feedback on the game.

The Q&A session offered some interesting information about the upcoming Bioware updates.

The session also included a trivia question session where Bioware representatives asked random SWToR questions from the audience and gave out prizes to the winners. Prizes included SWToR t-shirts, Star Wars Lego sets, while the grand prize was the book of Sith holocron. It’s worth mentioning that the grand prize was won by a participant who traveled all the way from Australia to attend the tour. Fans also attended from Europe and Asia.

Last but not least, the team distributed codes for an in-game M8-3R astromech droid and the famous USB drives revealing upcoming content releases. The USB drive contents are covered separately under this post.

Overall, the Cantina Tour was well-organized, well-attended and above all fun! Bioware representatives spent a lot time with fans, answered questions, while actively seeking feedback. If you never attended a Cantina tour and you play SWToR, check out the schedule posted at swtor.com for upcoming events- it’s definitely worth a trip.