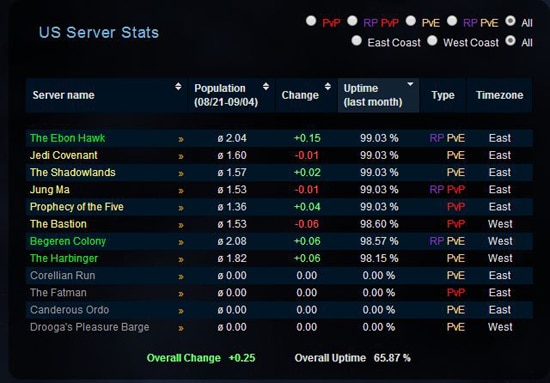 It’s no secret that since yesterday a number of SWToR servers have experienced a series of issues. Lag spikes, dropped connections and queues started with the Harbinger server, and then expanded to Begeren Colony and the Bastion. These issues eventually forced Bioware to take these servers offline for maintenance. According to an official post by Eric Musco at the SWToR community forums, players in the Harbinger server experienced some “rollback” after the server’s downtime. Musco was also quick to point out that no other servers were going to be affected by this issue. The situation eventually lead to the announcement of Patch 2.9.0d set to be deployed tomorrow.

Taking a closer look at the server uptime statistics from last month also reveals that the Beregen Colony, the Harbinger as well as the Bastion servers are in the bottom of the list with 98% uptime. What is interesting however, is that current server uptime numbers are lower as compared to the first month and a half of SWToR’s life back in 2011-2013. During that period server uptime values were 99.5% (source: EA Q3 FY12 earnings call)

While it’s certainly frustrating that issues like these impact game time, it’s encouraging that Bioware was quick to take action to fix them. With new features released last month and more content rolling in soon, it’s good to see that SWToR is moving in the right direction.