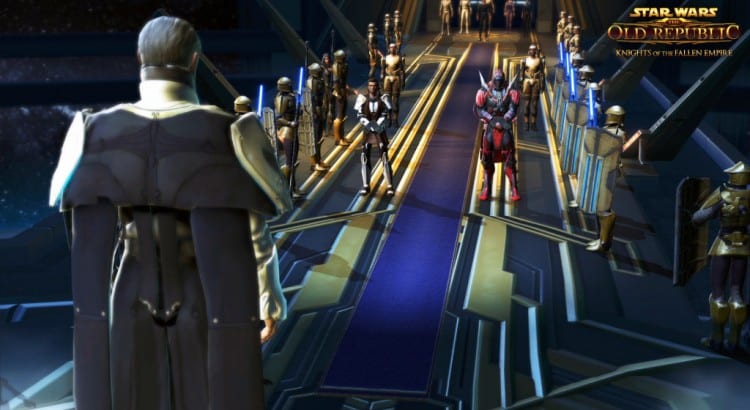 So Den of Geek asks an interesting question in a recent post on their site: Does Episodic Content Belong in an MMORPG? If you’ve played a lot of games, one thing you will know to be true is that episodic content is not a new concept. There are many games across many genres that use this. Basically it’s chapter-based content that is staggered throughout the game and while it’s been around a long time, it’s gaining in popularity today due to certain hit games like Telltale’s The Walking Dead (a favorite of mine) and Life is Strange.

But Den of Geek looks at a genre of gaming that has not seen a a lot of episodic content – the MMORPG. So it definitely makes a lot of sense for certain types of games. The story-driven content will keep players coming back for more and waiting to see what happens next. But does it make sense in an MMORPG?

Here’s what they had to say about SWTOR’s approach to this:

Star Wars: The Old Republic recently decided to try out the episodic approach in theirKnights of the Fallen Empire expansion, which was released in October 2015. The premise is simple—every few months, players will get a new chapter that advances the story the expansion set in motion.

On paper, the idea is pretty cool—and ideal for the SWTOR franchise. SWTOR has always been a story-heavy MMORPG—more so than most MMORPGs on the market currently. It’s a promising concept, and one that the developers pretty much banked on with the release of Knights of the Fallen Empire. The expansion’s endgame content—besides the promise of future story chapters—is a bit on the slim side, though. As I mentioned in my KotFE review, this development decision was indeed a risk since the expansion leans so heavily on that promise of episodic content and story.

So did it work out? Well, it depends on who you ask. While we’re happy overall with KotFE, they do make some good points here about why episodic content doesn’t work all that well in an MMORPG. Basically, for this concept to work, it has to work like a TV series, with each episode further moving along the plot. This definitely works in The Walking Dead but it doesn’t really work for SWTOR. While the story is good, there’s not really so much at stake with the overall story, based on the decisions you make and this is a key factor in episodic content in a video game.

That said, episodic content definitely has its place in an MMORPG and if anyone can pull it off, it’s Bioware. They have a lot of opportunity with this new expansion and the future chapters that they release. We’ve also seen successful episodic content in other MMORPGs, as the article mentions. WoW’s Mists of Pandaria is one example. Laura makes some great points in this article and it’s well worth the full read.

What do you think about episodic content in MMORPGs?