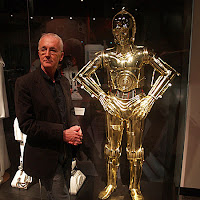 If you thought you heard a familiar voice coming from one of the droids in SWTOR, chances are you were right. If you keep your ear out for it, you will be able to hear and confirm that Anthony Daniels, the actor who played C-3PO in all of the Star Wars films is also in SWTOR.

IMDB lists him in the full voice cast but doesn’t specifically list the character(s) that he plays but many people have recognized the voice while testing the game.

He was born February 21, 1946 in Salisbury, Wiltshire, England, UK and his voice acting of C-3PO is probably his most known claim to fame.

Some SWTOR players have already been able to pinpoint the droids he voices in the new MMORPG. Apparently, he voices a droid on Dromund Kaas that asks you to remove a restraining bolt from it. There were also reports of his familiar voice coming from a droid in game that ends in “PO” as well. Is this the same droid or a different one?

We’re not sure yet just how many voice spots he might have in the game but we’re definitely going to be playing with an extra open ear and trying to find out. Let us know if you hear Anthony Daniels while you’re playing.