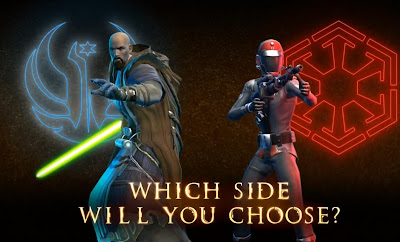 This Friday’s Update brings us a new Choose Your Side video featuring the Consular vs. the Agent, and a Pre-Order Announcement for Razer’s Old Republic Peripherals. The Agent vs. Consular video contains footage of the many abilities available to each class, along with testimonials from members of the Bioware team like Alexander Freed, and Jo Berry stating their cases on who’d win.

Lisa already covered the Razer story yesterday, so I won’t get any more into that one, but enjoy the movie below:

From the moment we announced the eight classes in Star Wars™: The Old Republic™, fans have been pitting them against each other, arguing who would have the advantage in a one-on-one fight. The hallways of BioWare echo this debate, with the writers, combat designers and other developers all chiming in on which class they feel reigns supreme.

In the latest entry of our series “Choose Your Side,” members of the Star Wars: The Old Republic team plead their cases for two iconic Star Wars™ classes, highlighting the many skills and abilities that set each class apart. This time around, Senior Writer Alexander Freed and Designer Ken Dilks argue in favor of the stealthy Imperial Agent, while Writer Jo Berry and Designer Jason Attard speak on behalf of the Force-wielding Jedi Consular.