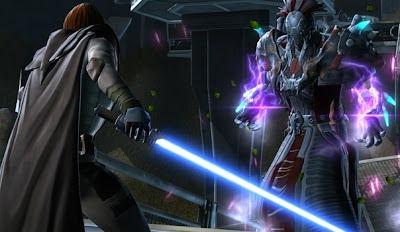 Michael Bitton from MMORPG.com has been sharing their own opinions and updates about SWTOR. Recently they wrote about five “not-so-great” things about SWTOR. This is actually refreshing with all the good news going around and all the hype about the game. Seeing negatives keeps the balance and it keeps it real. No game is perfect, even if it seems close. However, they later admitted that they forgot one important thing on their original list so they wrote a new feature and dedicated it all to this one omission- mirrored classes.

Here’s what they had to say about mirrored classes:
Having mirrored classes generally implies that each class has a counterpart on the opposing faction, but in Star Wars: The Old Republic this idea is taken quite literally. SWTOR’s class mirrors are actually not just extremely similar, but identical. For example, if you’ve played a Smuggler, you’ve played an Imperial Agent, and if you’ve played a Bounty Hunter, you’ve played a Trooper. Sure, they use different looking gear, their animations are flavored and styled to be class appropriate, but otherwise every skill and every talent is completely identical.
There are some things that differentiate them. For example, the class story and the unique content of each faction make them different but otherwise, they are basically the same class. The main purpose in this class mirroring is balance between the factions. However, MMORPG.com explain why this can be a bummer.

“If you’ve played one class for an extended period of time and feel like checking out how the other side lives, it’s a real shame to coincidentally pick your class mirror on the opposing faction and realize you already know how to play the character down to the tiniest detail.”

All good points. As an MMOer who likes to explore games by trying all the different classes and factions, I can agree that this seems a bit limiting. Can’t they mirror the classes without making every detail exactly identical? With all the storyline, money and expertise put into SWTOR, this could have been achieved, right?
What do you think?